NEW YORK, N.Y., Sept. 15, 2014 (SEND2PRESS NEWSWIRE) — With record numbers of resumes in circulation, Robert Gerberg, author of “The Professional Job Changing System” and dozens of other books on job hunting. has released entirely new guidelines for professionals and executives seeking from $60,000 to $300,000+, in his newly released book: “20 New Rules for Job Hunting Success.”

This “20 New Rules” e-book is available on Amazon.com for $3.95. Mr. Gerberg’s recommendations vary dramatically from the traditional approaches used by people to look for new jobs. In an era when Google, PNG, Boeing, Disney and Microsoft receive over 2 million resumes each day, he contends that entirely new approaches are called for.

In this book Mr. Gerberg claims too many talented people fail at job hunting because they use old style resumes and scatter them as they answer ads on the internet, perhaps visit a few recruiters and contact their network on Facebook or LinkedIn.

In short he claims their approach is haphazard and full of dead end leads, and that people get discouraged as they wind up job hunting for a long, long time.

In his “20 New Rules” book, Mr. Gerberg explains new styles of resumes that people have been using to generate many more calls for interviews.

Another one of his new rules has to do with the significantly increased success that people can enjoy by making use of strong marketing letters that can create significant interest. Samples are provided.

As you go up the income pyramid, a number of his new rules relate to the need for people to focus their actions on the private or unpublished job market. Above $100,000, surveys indicate that 85 percent of available jobs are never advertised.

He devotes many of his new rules to outlining the precise avenues for connecting to situations where private jobs are available and where there is much less competition.

As far as the public job market is concerned, he reviews all the places where jobs are advertised – through newspapers, trade magazines, job boards and elsewhere on the internet. In his book he outlines precise actions people can take for bringing much greater speed and convenience to their efforts in this area.

Throughout this new book he covers simple and straightforward ways for people to help reduce the average time for unemployment, to overcome age concerns, and to minimize other issues that frequently bother people and restrict their interview activity.

Robert James Gerberg is among America’s foremost authorities on professional job hunting. For more than 25 years he has authored dozens of books and multimedia presentations. He is also the creator of the TAPIT Worldwide System – a way for people to instantly connect with 97 percent of all jobs that are advertised anywhere in the U.S. – and also recent continuous daily leads and contacts.

Visit the Amazon author page for Mr. Gerberg to learn more about the new book, “20 New Rules for Job Hunting Success,” and other works, at: http://amzn.com/e/B00L5PD36W. 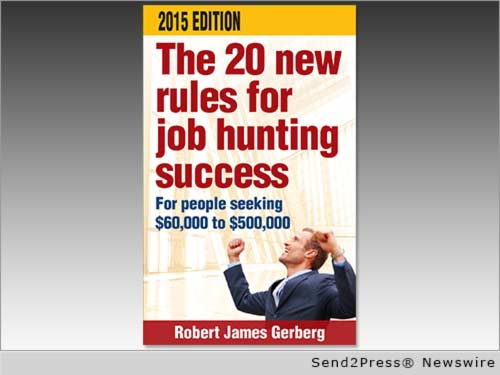 NEWS ARCHIVE NOTE: this archival news content, issued by the news source via Send2Press Newswire, was originally located in the Send2Press® 2004-2015 2.0 news platform and has been permanently converted/moved (and redirected) into our 3.0 platform. Also note the story “reads” counter (bottom of page) does not include any data prior to Oct. 30, 2016. This press release was originally published/issued: Mon, 15 Sep 2014 09:01:03 +0000