Big Bay Brewing Co. to Launch Its Hand-Crafted Specialty Beers at Retailers, Bars and Restaurants Across the State

MILWAUKEE, Wis., Nov. 22 (SEND2PRESS NEWSWIRE) — Big Bay Brewing Co. is introducing a signature line of hand-crafted beers to consumers throughout Wisconsin. The craft brewer, based in Shorewood, Wis., recently received its federal and state brewing licenses and will be launching two craft beers through select retailers, bars and restaurants across the state this month.

Craft beers, generally higher quality brews made in small batches, have seen growth of more than nine percent so far this year despite a struggling economy (Brewers Association). Big Bay’s founders wanted to produce beers that feature the unique flavor profiles and independent spirit of craft beers while maintaining an accessible taste.

“It’s been our vision to create high quality, hand-crafted beers for those who want full-bodied flavor with just the right balance of hops. We’re pleased with the results and we look forward to introducing Big Bay products to beer drinkers across Wisconsin,” said Jeff Garwood, Big Bay Brewing Co. co-founder and managing director.

Life on the Water is a Little Sweeter:
An important element of Big Bay Brewing is the brand’s ties to the water. Its founders believe that a high quality hand-crafted beverage should evoke the same good feelings and memories that one might associate with a relaxing afternoon at the lake; sitting on the banks of a river; or enjoying an evening around an oceanfront campfire with friends. Inspired by their own special memories of family vacations, summer weekends and long afternoons near lakes and oceans, the founders have infused their passion for the water throughout the brand. Water-themed imagery and graphics are used on the labels, packaging, promotional materials and branded merchandise.

The recipes for Big Bay beers were developed by Garwood and his co-founder with technical support from brewer Jim Lueders. While the beer is being commercially produced now, the founders have been “brewing” the idea for the specialty ales for years. They called on their years of experience working with major breweries and their personal likes and dislikes to help them select just the right styles and ingredients, including a proprietary yeast.

“Big Bay beverages were specifically created to invoke the good feelings one may experience while watching the waves roll in, but they are intended to be enjoyed anyplace – in the comfort of your home or at your favorite watering hole – and anytime of the year,” added Garwood.

To produce the beer, the company has entered into an alternating partnership with the Milwaukee Brewing Company who will brew the custom beers under the guidance of Big Bay, and according to Big Bay’s proprietary recipes.

“After a full year of courting a small group of reputable brewers, we chose to work with Milwaukee Brewing Company because of its strong reputation for brewing high-quality beer, as well as its strong set of Midwest values that mirror our own,” said Garwood.

While Big Bay products will be brewed at the Milwaukee Brewing site, the company will operate a company store and sampling center at 4517 N. Oakland Ave. in Shorewood, Wis. The center, scheduled to open in February, will offer consumers an opportunity to sample Big Bay products and purchase merchandise in a relaxed setting. Its proximity to the water in Shorewood – just a few short blocks from Lake Michigan – further adds to the Big Bay experience. The company will employ approximately a half dozen employees in sales positions.

Big Bay beers are developed from unique and custom recipes that are steeped in the brewing traditions and simple ingredients of years gone by. Featuring proprietary yeast and the highest quality ingredients, Big Bay beers offer the distinctiveness of Wisconsin’s microbrews with a clean finish. Big Bay beers are brewed slowly and methodically, letting nature do what it does best. The result is a well-balanced, robust, drinking experience.

Wave Hopper Kolsch Style Ale: Wave Hopper Kolsch puts a Wisconsin stamp on a German style ale to create a highly drinkable beer that’s perfect for a sunny afternoon. Its subtle but assertive hop and malty aromas stay on the tongue briefly and finish clean. A lighter-bodied ale, with a refreshing nature, the Kolsch showcases a hint of creaminess thanks to the addition of a small amount of wheat countered with just the right amount of hoppy zing from our Perle and Hersbrucker hops. The result is a wonderfully aromatic ale with pilsner malt and subtle hop character.

Boatilla Amber Ale: Its distinctive deep auburn amber hue comes from the special blend of Pale 2 Row and Cara Munich malt. And while this Amber is well-balanced and laid back, it has a bolder maltiness and a more assertive hopping than the Kolsch. Liken it to the perfect cliff jump – daring on the take-off and smooth on entry. It’s not too heavy, but brewed with boat-loads of flavor making it the beer of choice for an evening with friends and family.

Big Bay beers will be available at select retailers, bars and restaurants across Wisconsin. The beers will be sold at retail in 12-oz. bottles at a suggested retail price of $8.49 for a six-pack. The company also plans to launch a line of hand-crafted premium sodas which are currently in development.

About Big Bay Brewing Company:
Based in Shorewood, Wis., Big Bay Brewing Co. produces specialty hand-crafted beers. Big Bay is built with the vision that life on the water is a little sweeter…and, that sweet life is infused in every Big Bay beverage. Big Bay’s founders believe that craft brewed beverages and life on the water go hand in hand. Life on the water means creating and savoring memories and moments that are cherished for a lifetime. And, what better way to enhance those memories and moments than with the right beverage. For more information, visit www.BigBayBrewing.com . Follow us on Facebook, and on Twitter at twitter.com/bigbaybrewing . 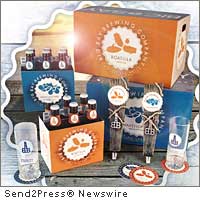 NEWS ARCHIVE NOTE: this archival news content, issued by the news source via Send2Press Newswire, was originally located in the Send2Press® 2004-2015 2.0 news platform and has been permanently converted/moved (and redirected) into our 3.0 platform. Also note the story “reads” counter (bottom of page) does not include any data prior to Oct. 30, 2016. This press release was originally published/issued: Mon, 22 Nov 2010 14:18:27 +0000

LEGAL NOTICE AND TERMS OF USE: The content of the above press release was provided by the “news source” Big Bay Brewing Company or authorized agency, who is solely responsible for its accuracy. Send2Press® is the originating wire service for this story and content is Copr. © Big Bay Brewing Company with newswire version Copr. © 2010 Send2Press (a service of Neotrope). All trademarks acknowledged. Information is believed accurate, as provided by news source or authorized agency, however is not guaranteed, and you assume all risk for use of any information found herein/hereupon.