Shelter Dog is Paws of Life for Missing Man

AMES, Iowa, Nov. 29 (SEND2PRESS NEWSWIRE) — Sometimes a hero is found at the local animal shelter. Moses, a three year old yellow lab/golden retriever, who is a certified search and rescue dog, found a missing Alzheimer’s patient earlier this month. “It takes a dog with the right stuff,” said Robin Habeger, of Paws of Life Foundation, and Moses’ handler and trainer. “Often that means the dogs do not make a good pet.”

Moses was relinquished to the Animal Rescue League in Des Moines in the spring of 2008 and placed with Habeger that summer. He started his training when he was six months old.

“Moses isn’t afraid of much and loves to bark for his toy, which is how he told me he found the missing man,” said Habeger.

The man had been missing from his care facility for approximately six hours dressed in only socks, jeans and a light shirt. “With temperatures around 40 degrees during the night, exposure and hypothermia were real threats to this man’s health and well being,” said Officer Jason Tuttle who helped organize the search that night. “Without these types of highly trained dogs, we may have not had such a happy ending.” Officer Tuttle is with the Ames Police Department.

Moses and Habeger train and deploy with STAR 1 Search and Rescue, Iowa Task Force 1 and are in training with Nebraska Task Force 1. Moses was found through a program between the Animal Rescue League of Iowa and the Paws of Life Foundation.

About Paws of Life:
The Paws of Life Foundation is a registered 501(c)3 non profit organization devoted to the training and education of search and rescue K9 handlers. Paws of Life also work with humane societies and animal shelters to home appropriate dogs in working dog homes. You can find more information at www.pawsoflife.org . 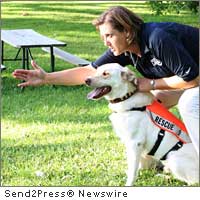 NEWS ARCHIVE NOTE: this archival news content, issued by the news source via Send2Press Newswire, was originally located in the Send2Press® 2004-2015 2.0 news platform and has been permanently converted/moved (and redirected) into our 3.0 platform. Also note the story “reads” counter (bottom of page) does not include any data prior to Oct. 30, 2016. This press release was originally published/issued: Mon, 29 Nov 2010 23:51:32 +0000

More from Paws of Life Foundation

ABOUT THE NEWS SOURCE:
Paws of Life Foundation

LEGAL NOTICE AND TERMS OF USE: The content of the above press release was provided by the “news source” Paws of Life Foundation or authorized agency, who is solely responsible for its accuracy. Send2Press® is the originating wire service for this story and content is Copr. © Paws of Life Foundation with newswire version Copr. © 2010 Send2Press (a service of Neotrope). All trademarks acknowledged. Information is believed accurate, as provided by news source or authorized agency, however is not guaranteed, and you assume all risk for use of any information found herein/hereupon.