The LIVE surgery, which occurred on September 24th, was an exciting example of Noble Vision Group’s dedication to delivering cutting edge technology to the eye care market.

Noble Vision Group President Patrick H. Witham commented, “We take tremendous pride in our organization’s ability to be agile and diverse, especially when presented with an opportunity to participate in developing a vehicle to deliver tools that ultimately advance this area of medicine. Of course, an event like this is always much easier when you are afforded the privilege of working with a highly skilled surgeon and great teacher such as Dr. Black.”

The MULTIDIODE® System, produced and distributed by ITI Laser, is the first DCR laser to receive worldwide CE approval and is the only FDA approved laser indicated for DCR surgery. The system is based upon high power, diode, laser, semi-conductor technology and enables surgeons to perform minimally invasive procedures in as little as 10 minutes.

Dr. Black described the event, saying, “The surgery went very well. When the patient was seen postoperatively at one week, he was comfortable, had no edema or eccymosis, and the tearing problem seems to be resolved. We will recheck him in about one month.”

A live question and answer session moderated by Dr. Paul S. Koch immediately followed the surgery and is included in the recorded version. Now open to the public, the recording of the LIVE surgery can be viewed by visiting http://www.michiganliveevents.com/bcast/NV/NVmain.php .

About Noble Vision Group, LLC:
Headquartered in Eugene, Oregon, Noble Vision Group, LLC, a Paragon BioTeck, Inc. company, is a research and development organization that was established in 2008 geared toward the development of niche medical products for the eye care community. For more information please email info@noblevisiongroup.com or visit www.noblevisiongroup.com .

About ITI, LLC:
Headquartered in Middletown, Connecticut, ITI, LLC is leading the way into the future of DCR surgery and is dedicated to providing state of the art equipment and unparalleled aftermarket service. For more information please contact info@itilaser.com or visit www.itilaser.com . 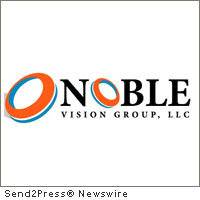 NEWS ARCHIVE NOTE: this archival news content, issued by the news source via Send2Press Newswire, was originally located in the Send2Press® 2004-2015 2.0 news platform and has been permanently converted/moved (and redirected) into our 3.0 platform. Also note the story “reads” counter (bottom of page) does not include any data prior to Oct. 30, 2016. This press release was originally published/issued: Tue, 30 Nov 2010 13:59:17 +0000

LEGAL NOTICE AND TERMS OF USE: The content of the above press release was provided by the “news source” Noble Vision Group, LLC or authorized agency, who is solely responsible for its accuracy. Send2Press® is the originating wire service for this story and content is Copr. © Noble Vision Group, LLC with newswire version Copr. © 2010 Send2Press (a service of Neotrope). All trademarks acknowledged. Information is believed accurate, as provided by news source or authorized agency, however is not guaranteed, and you assume all risk for use of any information found herein/hereupon.