John Waguespack’s work emerged onto the San Francisco art scene in 2005 and focuses on several mediums including oil, acrylic, ink, multimedia and industrial design. His inspiration is drawn from current events and pop culture.

“This collection is a reflection of my personal life experience but I think that this body of work offers something for everyone. I encourage those interested in current events and pop culture to come out and add their own interpretation and recollection to the process,” said John Waguespack.

A meet and greet with the artist and opening reception will take place on Friday December 3, 5:30-7:30 p.m. and the exhibition will remain on display until December 31, 2010.

“John’s work is complex and thought provoking, enabling the viewer to engage with his paintings. I’m excited to assist in launching John’s career at this his first solo exhibition. It is a major milestone for both of us,” said Joan McLoughlin, Gallerist of The McLoughlin Gallery.

About John Waguespack:
Born and raised in Atlanta, John Waguespack has been painting and drawing since the age of 3. After attending Boston College as a finance major, he spent several years working for Wall Street. In an attempt to recapture his sanity, he attended the Portfolio Center in Atlanta and studied art direction and design. John moved to San Francisco in 2000 where he was an art director for several bay area ad agencies. In 2005 he quit the 9 to 5 to focus completely on painting.

About The McLoughlin Gallery:
The McLoughlin Gallery is an approachable, inviting gallery with a social conscience. The main focus of the gallery is to educate and intrigue by showcasing established European contemporary artists and local emerging artists while giving back to the community. More information: http://www.mgart.com .

News issued by: The McLoughlin Gallery 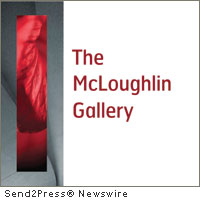 NEWS ARCHIVE NOTE: this archival news content, issued by the news source via Send2Press Newswire, was originally located in the Send2Press® 2004-2015 2.0 news platform and has been permanently converted/moved (and redirected) into our 3.0 platform. Also note the story “reads” counter (bottom of page) does not include any data prior to Oct. 30, 2016. This press release was originally published/issued: Wed, 01 Dec 2010 20:05:04 +0000

More from The McLoughlin Gallery

ABOUT THE NEWS SOURCE:
The McLoughlin Gallery

LEGAL NOTICE AND TERMS OF USE: The content of the above press release was provided by the “news source” The McLoughlin Gallery or authorized agency, who is solely responsible for its accuracy. Send2Press® is the originating wire service for this story and content is Copr. © The McLoughlin Gallery with newswire version Copr. © 2010 Send2Press (a service of Neotrope). All trademarks acknowledged. Information is believed accurate, as provided by news source or authorized agency, however is not guaranteed, and you assume all risk for use of any information found herein/hereupon.