LOS ANGELES, Calif., Dec. 6 (SEND2PRESS NEWSWIRE) — Indigenous plaintiffs from the Peruvian Amazon won their appeal today in the landmark human rights and environmental contamination lawsuit against U.S. oil giant Occidental Petroleum (Oxy), as the U.S. Court of Appeals for the Ninth Circuit ruled that the case should be heard in Los Angeles, Oxy’s hometown, EarthRights International announced today. A district court judge had previously ruled that the case should be litigated in Peru, but the Ninth Circuit disagreed, allowing the plaintiffs to proceed in federal court.

The lawsuit accuses Oxy of causing severe injuries by knowingly dumping a daily average of 850,000 barrels of toxic wastewater into the tropical rainforest inhabited by the indigenous Achuar people of northern Peru over a 30-year period, as well as inducing acid rain from gas flaring, and improperly storing waste in unlined pits. The plaintiffs allege that these outdated practices caused widespread lead and cadmium poisoning, among other serious health impacts.

“This is a major victory for the rights of indigenous peoples,” said Marco Simons, Legal Director of EarthRights International (ERI), who argued the appeal before the Ninth Circuit. “Oxy will now face justice in the U.S. federal courts, rather than in a Peruvian legal system that has never compensated indigenous groups for environmental contamination.” The Ninth Circuit’s opinion indicates that it was not convinced of “the ability of the Peruvian courts to satisfactorily handle this case,” citing corruption and “disorder in the Peruvian judiciary.”

Atossa Soltani, Executive Director of Amazon Watch, added, “The Achuar people continue to suffer the devastating health impacts caused by Oxy’s damaging practices, which were illegal in the U.S. at the time. This ruling means that the Achuar will finally get their day in U.S. court and signals the end of the era when companies could destroy indigenous communities and their environment with impunity.” Amazon Watch has advocated for the Achuar people for many years, and joined the case as a plaintiff to challenge Oxy’s allegedly fraudulent denials of responsibility for the pollution.

The Achuar case, Maynas Carijano v. Occidental Petroleum, No. 08-56187 (9th Cir.), was filed in May 2007 in the U.S. District Court for the Central District of California. In April 2008, the district court ruled that the case should be heard in Peru under the legal doctrine of forum non conveniens. The plaintiffs and their counsel, including Washington, DC-based ERI, the Venice, CA firm Schonbrun DeSimone Seplow Harris Hoffman & Harrison LLP, and San Francisco lawyer Natalie Bridgeman, appealed that ruling. The Ninth Circuit’s opinion was issued by Judge Kim McLane Wardlaw, joined by Judge Mary M. Schroeder; Judge Pamela Ann Rymer agreed with part of the opinion and issued a partial dissent.

According to “A Legacy of Harm” (link to PDF), a 2007 report issued by ERI, Amazon Watch, and the Peruvian legal non-profit Racimos de Ungurahui, Oxy’s operations discharged billions of barrels of untreated wastewater into local streams, caused numerous spills and resulted in many unremediated toxic waste sites in Achuar territory, with severe health and livelihood consequences for the Achuar.

The full report and the Ninth Circuit’s opinion are available at www.earthrights.org .

About EarthRights International:
EarthRights International (ERI) is a nonprofit, nongovernmental organization that combines the power of law and the power of people in defense of human rights and the environment. Focusing on earth rights, we work at the intersection of human rights and the environment. We specialize in fact-finding, legal actions against perpetrators of earth rights abuses, training for grassroots and community leaders, and advocacy campaigns that seek to end earth rights abuses and promote and protect earth rights. To learn more, including viewing a copy of A Legacy of Harm, please visit: http://www.earthrights.org .

About Amazon Watch:
Amazon Watch is an environmental and human rights organization working to protect the rainforest and advance the rights of indigenous peoples in the Amazon Basin. We partner with indigenous and environmental organizations in campaigns for human rights, corporate accountability and the preservation of the Amazon’s ecological systems. To learn more please visit: http://www.amazonwatch.org . 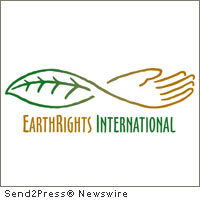 NEWS ARCHIVE NOTE: this archival news content, issued by the news source via Send2Press Newswire, was originally located in the Send2Press® 2004-2015 2.0 news platform and has been permanently converted/moved (and redirected) into our 3.0 platform. Also note the story “reads” counter (bottom of page) does not include any data prior to Oct. 30, 2016. This press release was originally published/issued: Mon, 06 Dec 2010 22:36:22 +0000

ABOUT THE NEWS SOURCE:
EarthRights International

LEGAL NOTICE AND TERMS OF USE: The content of the above press release was provided by the “news source” EarthRights International or authorized agency, who is solely responsible for its accuracy. Send2Press® is the originating wire service for this story and content is Copr. © EarthRights International with newswire version Copr. © 2010 Send2Press (a service of Neotrope). All trademarks acknowledged. Information is believed accurate, as provided by news source or authorized agency, however is not guaranteed, and you assume all risk for use of any information found herein/hereupon.