These New Year’s Eve events are unique because of the wonderful mix of both singles and couples of all ages.

“Both couples and singles enjoy these parties, which offer a vibrant atmosphere to help kick off 2010,” Mr. Seyer explained. “Singles like to mingle and make new friends for possible future dating and romance. Couples tell me they love the energy and the atmosphere because ‘singles know how to party.'”

The Concord NYE celebration will feature live entertainment,two big, elegant ballrooms. Popular Bay Area band, Livewire will take the stage in one ballroom, while DJ Mike Westerman will spin tunes and take requests in another. Victor Lawhorn, who loves to enhance social gatherings with various kinds of games will be managing casino gaming, which will include 4 gaming tables. “I asked Victor to manage casino gaming for us this year because he was so popular last year. He had a crowd of people gathered around his Big Wheel spin game all night long.” said Seyer. Hundreds of dollars in casino gaming prizes will be offered.

Package deals including meals, rooms and breakfast are available. Two complimentary food-drink tickets, party favors and a champagne toast add to the excitement when a big balloon drop takes place at midnight.

The Sacramento location will offer similar entertainment, but include three dance floors. Two live bands and a DJ will occupy three separate rooms. Mercy Me! (Band), a favorite R&B band in the Sacramento area, will play in one ballroom while The Groove Thang Band, specializing in old-school favorites from the 70’s, 80’s and 90’s, will fill the dance floor in another. In the third ballroom, DJ Ron Davis will offer a variety of dance music. A magician will add to the fun.

Complimentary Parking is available at both Hilton Hotel locations. The party fee for these parties is $75 at the door. Advance discount tickets are available at www.ProGuildSocial.com – a free social networking website. ProGuildSocial members can participate in various contests; prizes that will be awarded include a free room and NYE party at the Hilton Concord and at the Hilton Arden West as well. 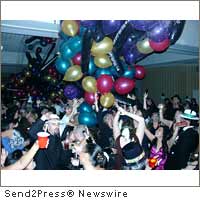 NEWS ARCHIVE NOTE: this archival news content, issued by the news source via Send2Press Newswire, was originally located in the Send2Press® 2004-2015 2.0 news platform and has been permanently converted/moved (and redirected) into our 3.0 platform. Also note the story “reads” counter (bottom of page) does not include any data prior to Oct. 30, 2016. This press release was originally published/issued: Tue, 07 Dec 2010 17:03:25 +0000

LEGAL NOTICE AND TERMS OF USE: The content of the above press release was provided by the “news source” Professionals Guild or authorized agency, who is solely responsible for its accuracy. Send2Press® is the originating wire service for this story and content is Copr. © Professionals Guild with newswire version Copr. © 2010 Send2Press (a service of Neotrope). All trademarks acknowledged. Information is believed accurate, as provided by news source or authorized agency, however is not guaranteed, and you assume all risk for use of any information found herein/hereupon.