NEW YORK, N.Y., Dec. 7 (SEND2PRESS NEWSWIRE) — An exciting new, free Smartphone App called Venuing™ is being formally introduced this Friday at Z100’s Jingle Ball in New York’s Madison Square Garden. Venuing adds an exhilarating new dimension of audience engagement to the experience of live concerts and sporting events. With the app installed on an iPhone, Android or Blackberry a fan can be in live communication with other Venuing fans at the same event.

A 3-D image of the venue pinpoints your seat location (a red pin) as well as those of other Venuing fans (blue pins) all over the stadium, arena or theater. Real-time opinions and messages can be traded among the fans at the event with voice bubble call-outs geo-targeted to each Venuing participant’s seat. As comments are made, voice bubbles instantly appear as pop-ups all over Venuing’s 360-degree views. There is an alternate option to use a threaded view format, which includes Venuing users at home.

The app is now downloadable via Venuing.com, with versions for all major smartphone platforms. It is also available at the service providers’ mobile App Stores. Desktop users can participate via the Venuing Live online application found at Venuing.com.

This Friday, December 10th at Z100’s Jingle Ball in Madison Square Garden, live event history will be made as Venuing resonates through the concert’s audience. Participants automatically will be entered into the running for four pairs of tickets to the Jingle Ball After-Party at B.B. King’s Blues Bar & Grill in Times Square with a grand prize of an iPad.

Friday afternoon from 12 to 6 p.m. Venuing representatives will be at Jingle Ball’s All Access Lounge at the Hammerstein Ballroom, 311 W 34th St., New York to demonstrate and turn fans on to their new App. Look for the people attached to red and blue helium balloons.

“Our Web site and new mobile app create a great environment for sports and entertainment fans of all ages,” said Ira Eckstein, one of the founders and principles. “Never before has there been such a focused, live-action analysis from the fans – for the fans. It’s an unfiltered and organic commentary. Venuing will enhance the entertainment experience by leap years.”

For more information visit http://Venuing.com or search under your App Store for the free app, Venuing. 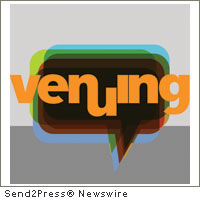 NEWS ARCHIVE NOTE: this archival news content, issued by the news source via Send2Press Newswire, was originally located in the Send2Press® 2004-2015 2.0 news platform and has been permanently converted/moved (and redirected) into our 3.0 platform. Also note the story “reads” counter (bottom of page) does not include any data prior to Oct. 30, 2016. This press release was originally published/issued: Wed, 08 Dec 2010 00:35:10 +0000

ABOUT THE NEWS SOURCE:
Venuing Inc.

LEGAL NOTICE AND TERMS OF USE: The content of the above press release was provided by the “news source” Venuing Inc. or authorized agency, who is solely responsible for its accuracy. Send2Press® is the originating wire service for this story and content is Copr. © Venuing Inc. with newswire version Copr. © 2010 Send2Press (a service of Neotrope). All trademarks acknowledged. Information is believed accurate, as provided by news source or authorized agency, however is not guaranteed, and you assume all risk for use of any information found herein/hereupon.