After high winds postponed Friday’s downhill, Eddy and Betty led a “Blessing Ceremony for the Joy and Safety of the Athletes,” early Saturday, which worked. That afternoon the Boxes led a sacred “Gratitude Snowdance” in Minturn near Meloit Park, attracting over 100 regional students, sages.

“Vail then enjoyed 28 inches of powder with more on the way, so everyone is happy,” said Bindu Pomeroy, Vail Ski and Snowboard Academy’s teacher who orchestrated the ceremonies with our Native American Olympic Team Foundation (NAOTF).

More dreams came true when these world racing heroes and media witnessed, along with a rescued eagle, the winds transform into gentle breezes, plus snowblessings, to bring back to their communities. By suggesting leaders invite nearby Indigenous Elders (or our Native American Elders) to lead Earth-healing ceremonies, phenomenal things could happen.

A related miracle happened near Washington DC. “Following UN’s Maria Mercedes Sanchez also sending blessings in solidarity, on Saturday morning, skier Olivia Ellis, a gifted Elder guiding our Bolivian UN Ceremonial Initiative, joined me by phone in a blissful prayer ‘for the greater good of all at Vail,’ That afternoon, Virginia’s Wintergreen ski area next door to Olivia, was blanketed with rare early snow, showing Nature spirits are sensitive to those with gratitude for Mother Earth, wherever they are,” said Olympic skier, Suzy “Chapstick” Chaffee, NAOTF’s co-chair.

“A nice way to thank the Champions of Nature in Washington who get revitalized and inspired skiing here, which strengthens their environmental efforts,” said Dr. Ellis.

All this is from aligning with the UN goal of healing Mother Earth through our Elders’ solution, backed by their partner, the late 2007 Shared Nobel Peace Prizewinner, Dr. Stephen Schneider, plus three Nobel Laureates, Eric Chivian, Muhammad Yunus, and Joseph Stiglitz: “Rebalancing Nature’s cycles in practical and spiritual ways through these cross-cultural ceremonies, is key to reconnecting with Mother Earth’s heart and restoring Eden.”

“It is time to listen to the voices of Indigenous people,” said UN General Assembly President Miguel d’Escoto Brockmann.

Hail to the Bolivian Mission, their co-sponsors, and General Assembly, for brilliantly designating April 22 as U.N.’s International Mother Earth Day.

“Vail’s snowdances have spread across North America thanks to visionary ski areas sharing joyful uplifting snow sports with nearby tribal youth,” said Sanchez. “Global communities inviting their Elders to lead mountain blessings and snowdances, as well as ocean ceremonies, can inspire everyone to live in more harmony with Nature, as we are interrelated and therefore so is our health. We must and can help restore our suffering Mother Earth leading up to Her Day,” said UN Bolivian Ambassador Loayza.

“The Boxes inaugurated a curriculum at Vail Academy on Friday,” said headmaster Geoff Grimmer proudly. “Betty urged them to ‘Talk to and hug trees, express anger, cry and listen, to let hurts go so we don’t pass them on.'”

That’s what can happen giving love and respect to Mother Earth. More info on http://snow-riders.org and http://naotf.org . 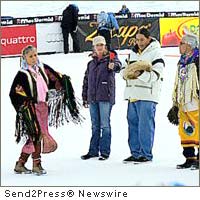 NEWS ARCHIVE NOTE: this archival news content, issued by the news source via Send2Press Newswire, was originally located in the Send2Press® 2004-2015 2.0 news platform and has been permanently converted/moved (and redirected) into our 3.0 platform. Also note the story “reads” counter (bottom of page) does not include any data prior to Oct. 30, 2016. This press release was originally published/issued: Wed, 15 Dec 2010 00:51:16 +0000

LEGAL NOTICE AND TERMS OF USE: The content of the above press release was provided by the “news source” Native American Olympic Team Foundation or authorized agency, who is solely responsible for its accuracy. Send2Press® is the originating wire service for this story and content is Copr. © Native American Olympic Team Foundation with newswire version Copr. © 2010 Send2Press (a service of Neotrope). All trademarks acknowledged. Information is believed accurate, as provided by news source or authorized agency, however is not guaranteed, and you assume all risk for use of any information found herein/hereupon.