LOS ANGELES, Calif., Dec. 15 (SEND2PRESS NEWSWIRE) — In honor of the first ever National Entrepreneur’s Day, the United States Global Enterprise Association (USGEA) held a event called Entrepreneur’s Conference 2010 (ECON2010) to honor and celebrate the spirit of entrepreneurism. Put into motion by a concept for a day honoring American entrepreneurs which arose in January 2010 and was proclaimed an actual holiday by President Obama shortly thereafter, the USGEA decided to put on this event to coincide with the new holiday and honor those who are continuing to build up the U.S. economy.

After a process that merited thousands of signatures and 6 months of campaigning, National Entrepreneur’s Day was appointed as the last day in National Entrepreneur’s Week by President Obama earlier in 2010. As such, the USGEA designed ECON2010 as a way to bring entrepreneurs and enterprises together on this day and offer them the chance to network and learn from one another in an event that aimed to encourage the entrepreneurial spirit. In addition to offering networking opportunities and resources, ECON2010 also aimed to honor those who were doing an exceptional job in their part as entrepreneurs.

“We created ECON2010 as a way to celebrate and encourage entrepreneur’s all over the U.S. and we are very proud with the way the event turned out,” said USGEA Chairman Shaan Kumar. “We were able to honor some outstanding entrepreneurs and plan on making this a yearly event that business owners, and future business owners can look forward to.”

In addition to ECON2010, the USGEA is a general supporter of the growth of small, medium and large enterprises, and encourages this growth daily through its membership which connects entrepreneurs, executives, educators, investors and other business people from all around the world. For more information on the USGEA or ECON2010 please visit www.usgea.org .

About The United States Global Enterprise Association:
The United Stated Global Enterprise Association (USGEA) is a non-profit global business network formed by entrepreneurs, executives, educators and investors for the growth and development of small, medium and large enterprises, emerging entrepreneurs and professionals. Membership in the USGEA gives individuals and organizations the opportunity to be part of a movement that is fostering an era of global connectivity. For more information on the USGEA please visit www.usgea.org . 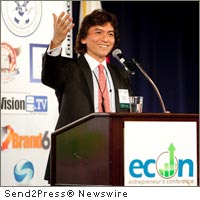 NEWS ARCHIVE NOTE: this archival news content, issued by the news source via Send2Press Newswire, was originally located in the Send2Press® 2004-2015 2.0 news platform and has been permanently converted/moved (and redirected) into our 3.0 platform. Also note the story “reads” counter (bottom of page) does not include any data prior to Oct. 30, 2016. This press release was originally published/issued: Wed, 15 Dec 2010 21:04:54 +0000

LEGAL NOTICE AND TERMS OF USE: The content of the above press release was provided by the “news source” United States Global Enterprise Association or authorized agency, who is solely responsible for its accuracy. Send2Press® is the originating wire service for this story and content is Copr. © United States Global Enterprise Association with newswire version Copr. © 2010 Send2Press (a service of Neotrope). All trademarks acknowledged. Information is believed accurate, as provided by news source or authorized agency, however is not guaranteed, and you assume all risk for use of any information found herein/hereupon.