LOVES PARK, Ill., Dec. 16 (SEND2PRESS NEWSWIRE) — A new t shirt by Slamtees, an online t shirt design company, has found the humor in the Wikileaks news story. Slamtees today announced the availability of the Wikileaks T-Shirt. The Wikileaks story has recently dominated headlines. There lots of people on both sides of the issue regarding Wikileaks. Some are in favor and some are against.

“We really want all involved in a situation to realize that if we just take a step back, see the bigger picture of what’s really important in life they’ll see humor in most subjects. No subject is off limits. Our motto is when life happens just slam it,” says Rick Smith of Slamtees.

Slamtees specialize in creating humorous shirts for your wearing pleasure. Their shirts are “scientifically proven to make your pants look 500% nicer and your general appearance 1000% more appealing.”

Slamtee’s shirts break the ice and start the conversation so you don’t have to. Dozens of unique shirts are available and when you wear them watch the magic unfold next time you are out at a party or out with friends.

Slamtee t shirts are available in black, grey, and white in any size small to XL for $20 ($23 for XXL and XXXL) and prices includes shipping. 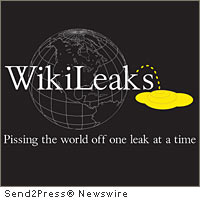 NEWS ARCHIVE NOTE: this archival news content, issued by the news source via Send2Press Newswire, was originally located in the Send2Press® 2004-2015 2.0 news platform and has been permanently converted/moved (and redirected) into our 3.0 platform. Also note the story “reads” counter (bottom of page) does not include any data prior to Oct. 30, 2016. This press release was originally published/issued: Thu, 16 Dec 2010 22:41:21 +0000

ABOUT THE NEWS SOURCE:
Slamtees

LEGAL NOTICE AND TERMS OF USE: The content of the above press release was provided by the “news source” Slamtees or authorized agency, who is solely responsible for its accuracy. Send2Press® is the originating wire service for this story and content is Copr. © Slamtees with newswire version Copr. © 2010 Send2Press (a service of Neotrope). All trademarks acknowledged. Information is believed accurate, as provided by news source or authorized agency, however is not guaranteed, and you assume all risk for use of any information found herein/hereupon.