MANCHESTER, Vt., Dec. 21 (SEND2PRESS NEWSWIRE) — After hunkering down throughout 2010 recovering from a sobering 2009, banks will resume technology investments in 2011, in part with an eye toward meeting new demands on their payments operations, according to CONIX Systems, Inc. (CONIX). A leading international provider of payment processing solutions to the financial services industry, CONIX believes banks need to prepare for an overall increase in debit transactions, mobile payments options, and branch item capture, and the demands they will place on processing operations.

“Banks being on more stable ground clearly has set the stage for a period of strategic business redistribution in the industry. As a result, banks have not been spending as they may have wished on operations technology,” according to CONIX’s CEO, Mike Charles. “Even while banks have been restrained on technology investment for the last 18 – 24 months, technology development has continued to advance new types of payment options, including mobile payment innovations such as consumer check image deposits and contactless payments via credit and debit card chips embedded in Smartphone devices.”

“Banks are on the frontline as payment preference shifts away from credit card to debit account transactions,” observes CONIX’s Managing Director, Sales Steve Fortson. “The 2010 Federal Reserve Payments Study released earlier this month documents what our solutions have anticipated – a marked increase in payment options and the bank’s ability to integrate various payment channels.”

Debit account transactions, including mobile payments made via debit-linked Smartphone devices, present to banks in a format currently supported by the banks’ item processing platform. The new volume of debit transactions in item processing will create a natural, if entirely unintended consequence, of pumping up opportunities for fraud and duplicate items in all channels.

“Since technology projects favored for attention will include building out remote deposit capture and mobile payments applications, banks must also renew their investments in fraud prevention and acceleration of exception processing,” according to Charles.

“Merchant capture has gained a head of steam and will continue to gain adoption, clearing the way for banks and merchants alike to benefit from efficiencies in the payment stream,” said Fortson. “For banks, one of the real benefits is the decentralization of item processing operations. Commercial payments never shifted from checks, which drove the demand for RDC and banks’ deployment of branch item capture.”

Fortson concludes, “The necessity for processors to become more efficient will pique interest in ASP models that combine fraud detection, duplicate detection and IRD printing into a total processing utility that would share interbank payments information while preventing large investments of capital in software and hardware. These kinds of models could evolve into a self-policing, intelligence-gathering payment clearinghouse environment that could share interbank payments information.”

About CONIX Systems:
CONIX Systems, Inc. (www.CONIX.com) is a world leader in providing payment processing software and related services to the financial services industry. The company’s products perform key processing tasks for an estimated 100 billion paper and electronic items each year and handle virtually every aspect of payment processing – including work flow management, exception processing, early fraud detection, and image exchange. CONIX software and services are used by approximately 90 percent of the largest banks in the country. Founded in 1992, the company is headquartered in Manchester, Vt., with offices throughout the United States. 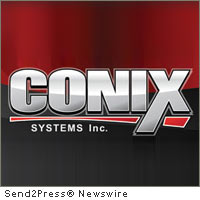 NEWS ARCHIVE NOTE: this archival news content, issued by the news source via Send2Press Newswire, was originally located in the Send2Press® 2004-2015 2.0 news platform and has been permanently converted/moved (and redirected) into our 3.0 platform. Also note the story “reads” counter (bottom of page) does not include any data prior to Oct. 30, 2016. This press release was originally published/issued: Tue, 21 Dec 2010 21:06:35 +0000