MORRISTOWN, N.J., Dec. 28 (SEND2PRESS NEWSWIRE) — MBD Consulting announced this week the release of “A Patzer’s Story” (ISBN: 978-1-4560-3797-0), authored by its managing director, Timothy A. Sawyer, and published by PublishAmerica. In the book, Sawyer outlines his battle with depression and draws parallels between that and his passion for chess.

Sawyer first started to write the book on November 10, 2010 and sent the initial manuscript to PublishAmerica on November 14, 2010. It was accepted a short time later and released on December 22, 2010.

“I’m amazed by how this has all come together within such a short period of time,” adds Sawyer.

He explains that he only submitted the manuscript to one publisher – PublishAmerica – and they are giving the book the chance it deserves.

About the Author:
Timothy A. Sawyer is an IT Professional and managing director of MBD Consulting. He enjoys playing chess, but over the past year has found many things in life a challenge due to his ongoing battle with depression. He says, “Frustration breeds action,” so he decided to take things into his own hands and to channel this negative energy regarding recent losses. It was the writing of this book that cleared his head, and he now wishes to share his insights with the world.

About PublishAmerica:
PublishAmerica, a traditional advance and royalty-paying book publisher, launches authors in the best tradition of old-fashioned quality publishing. The Maryland-based publishing company is fundamentally opposed to issuing contracts that contain any publishing fees. PublishAmerica was founded on the premise that a book is worth publication if there are even the seeds of a market for it.

To learn about MBD Consulting, visit: www.mbdsolus.com; for information about PublishAmerica, visit: www.publishamerica.com or call: 301-695-1707.

To learn more about “A Patzer’s Story,” contact the author directly at: 973-285-3261; at tsawyer@mbdsolus.com or visit http://www.authorsden.com/timothysawyer . 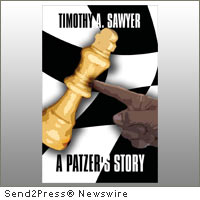 NEWS ARCHIVE NOTE: this archival news content, issued by the news source via Send2Press Newswire, was originally located in the Send2Press® 2004-2015 2.0 news platform and has been permanently converted/moved (and redirected) into our 3.0 platform. Also note the story “reads” counter (bottom of page) does not include any data prior to Oct. 30, 2016. This press release was originally published/issued: Tue, 28 Dec 2010 21:09:34 +0000

LEGAL NOTICE AND TERMS OF USE: The content of the above press release was provided by the “news source” MBD Consulting, LLC or authorized agency, who is solely responsible for its accuracy. Send2Press® is the originating wire service for this story and content is Copr. © MBD Consulting, LLC with newswire version Copr. © 2010 Send2Press (a service of Neotrope). All trademarks acknowledged. Information is believed accurate, as provided by news source or authorized agency, however is not guaranteed, and you assume all risk for use of any information found herein/hereupon.