ELY, Minn., Jan. 12 (SEND2PRESS NEWSWIRE) — Preparations are underway for the 17th annual Ely Winter Festival slated for February 3-13, 2011, in the northern Minnesota tourist city known for its local beauty and wilderness. The volunteer Board has announced a schedule of events with something for all ages and interests, ranging from the annual Mukluk Ball, Sled Dog Rides, and historic Voyageur Encampment, to a crafts fair, ice fishing contest, food events, and the Ely ArtWalk taking place over the Festival’s 10-day period.

The cornerstone of the Festival is the International Snow Sculpting Symposium in the town’s Whiteside Park with 20 smaller “amateur” blocks and 20 large “expert” blocks, each carved by a three-person team. “We have about 60 snow carvers, both local and some who travel here each year just for this event,” said Chris Ellerbroek, co-director of the Symposium. “This year we have a theme, ‘Mythology and Folklore,’ so we’re looking forward to seeing the creative interpretations brought by the carvers.”

Alongside the carvers in the park is an authentic Voyageur Encampment, with the participants in historic garb camping out over the three-day weekend.

The downtown area of the town becomes a veritable art gallery, as merchants clear their windows to display local artists’ works in the Ely ArtWalk, which also runs over the 10 days of the Festival. Over 450 pieces of art by 120 artists will be displayed this year.

The Festival kicks off with the “Snow Carvers Jam” on Thursday night, February 3, at the Ely Steak House. Some of the visiting carvers bring their instruments and join in with local musicians for a night of shared musical fun.

The Kizer Foundation hosts a Spaghetti Feed on Friday evening, February 3, and co-hosts with the Ely JayCees a WinterFest Dance on Saturday night, February 4. The events benefit the Foundation, which helps area residents with medical financial burdens.

During the day on Saturday, February 5, is the NLAA crafts fair, a fish fry at Veterans-on-the-Lake Resort, and a “Friends of the Trezona Trail” meet and greet at Northern Grounds sponsored by the Nordic Ski Club. Skiing the trail is encouraged, with equipment rental available next door at Piragis Northwoods Company. Fishermen and women can gather at the Grand Ely Lodge for the first annual Ely Rotary Ice Fishing Classic (TERIFC) for big prizes and lots of fun.

Also on Saturday, Vermilion Community College holds an open house, the Dorothy Molter Museum is open for visits and the Ely ArtWalk holds its official opening at the Chocolate Moose.

On Wednesday, mid-week of the Festival, the Energy Efficient Ely (E3) hosts a panel discussion at 5:30PM in Vermilion Community College Rm 104.

The second weekend of the Festival is packed with events as well. For outdoor and history enthusiasts, on Friday morning, February 11, Outward Bound guides a group to the Hegman Lake Native American Pictographs by snowshoe. Friday begins a long weekend event by the International Wolf Center, “Mush with Dogs, Howl with Wolves.”

Also on Saturday night is the Dorothy Molter Museum fundraising dinner at Grand Ely Lodge. Entertainment and prizes will be offered.

Festival pins, T-shirts, beanies, brochures and information are available at the Festival Headquarters, the Front Porch Coffee and Tea Co., which has free Wi-Fi for customers’ laptops and computer rental time available, as well as organic hot beverages and light, healthy food.

Up-to-the-minute details on events and Festival news can be found on the Festival’s website ElyWinterFestival.com. Of special interest is the gallery, containing video and still shots of past years’ snow sculptures. A web cam of the park and the snow sculptures is also available on the site during the Festival.

The Ely Winter Festival is a non-profit organization whose activities are made possible in part by grants from the Ely Chamber of Commerce and Arrowhead Regional Arts Council through an appropriation from the Minnesota State Legislature with support from local businesses and organizations. 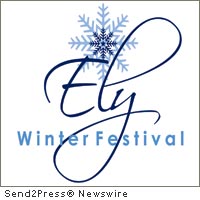 NEWS ARCHIVE NOTE: this archival news content, issued by the news source via Send2Press Newswire, was originally located in the Send2Press® 2004-2015 2.0 news platform and has been permanently converted/moved (and redirected) into our 3.0 platform. Also note the story “reads” counter (bottom of page) does not include any data prior to Oct. 30, 2016. This press release was originally published/issued: Wed, 12 Jan 2011 21:59:45 +0000

LEGAL NOTICE AND TERMS OF USE: The content of the above press release was provided by the “news source” Ely Winter Festival or authorized agency, who is solely responsible for its accuracy. Send2Press® is the originating wire service for this story and content is Copr. © Ely Winter Festival with newswire version Copr. © 2011 Send2Press (a service of Neotrope). All trademarks acknowledged. Information is believed accurate, as provided by news source or authorized agency, however is not guaranteed, and you assume all risk for use of any information found herein/hereupon.