The Gruesome True Story of the 2006 Richmond Murder Spree

“This is the version of the murders that never made the news,” says author Larry Johnson, who writes under the pseudonym The Ghost. “This is the story of Lilly Ann Pauley, the woman who made the 911 call that would later put an end to Ricky Gray and Ray Dandridge’s vicious murder spree. This story will bring readers face to face with pure evil.”

Cold Blooded also exposes for the first time, new and shocking information that law enforcement failed to unveil during the course of their investigation as well as exposes the poor treatment Lilly Ann Pauley received from law enforcement after assisting them in breaking one of the biggest murder cases in decades.

Interviews with the author with Style Weekly magazine and on WTVR television about this chilling and fascinating story have already caused an uproar throughout the city of Richmond where the Harvey family murders took place.

“Lilly Ann Pauley’s story needs to be told,” says Johnson. “It is a story that will shake you out of your seats!”

Cold Blooded is available for $13.95 and can be ordered from: 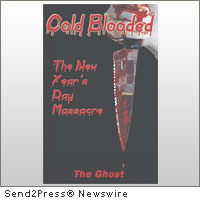 NEWS ARCHIVE NOTE: this archival news content, issued by the news source via Send2Press Newswire, was originally located in the Send2Press® 2004-2015 2.0 news platform and has been permanently converted/moved (and redirected) into our 3.0 platform. Also note the story “reads” counter (bottom of page) does not include any data prior to Oct. 30, 2016. This press release was originally published/issued: Thu, 20 Jan 2011 19:21:41 +0000