ENCINITAS, Calif., Feb. 2 (SEND2PRESS NEWSWIRE) — Event Media Inc., organizers for the fifth annual San Diego Century Bicycle Tour, announce the availability of expo and sponsorship packages for the event on May 21, 2011. Set to start and finish at MiraCosta College the event offers plenty of intriguing promotional opportunities for businesses.

One of the most anticipated events on the local cycling calendar, this three-course tour of top San Diego cycling routes will include an expo on May 21, with opportunities for additional exposure the day before during rider registration.

The expo will be held at the Start/Finish line of the ride on the grounds of MiraCosta College in Cardiff and will include space for 20 – 30 exhibitor booths with a live music area, finish line photographs, bike valet and “Taste the Hills” food booths.

On the heels of last year’s record number of entrants, organizers expect some 2,000 riders to participate in the 2011 San Diego Century Bicycle Tour. Expo traffic will include riders with their family and friends, along with visitors and existing local traffic.

Along with event day activities sponsors can participate in promotions that include 17 weeks of training for a century, social media promotion (including contests and giveaways), online advertising investments and many promotion partnerships with regional cycling groups.

Booth space at the expo is available, along with sponsorship packages ranging from official sponsor to presenting sponsor and title sponsor. A la carte sponsorship items offer a range of targeted event and online exposure opportunities.

The cycling courses provide riders with an opportunity to taste the hills with both varying elevation gains and tasty cuisine at the aid stations and finish line. Hills on the courses range from moderate on the 37-mile course to challenging on the 103-mile course. 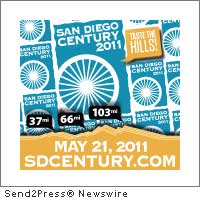 NEWS ARCHIVE NOTE: this archival news content, issued by the news source via Send2Press Newswire, was originally located in the Send2Press® 2004-2015 2.0 news platform and has been permanently converted/moved (and redirected) into our 3.0 platform. Also note the story “reads” counter (bottom of page) does not include any data prior to Oct. 30, 2016. This press release was originally published/issued: Thu, 03 Feb 2011 00:52:37 +0000