RANCHO CUCAMONGA, Calif., Feb. 8 (SEND2PRESS NEWSWIRE) — Edward Professional Advisors announces that the City of Compton has selected it to help create its own police department. The Mayor of the City of Compton says, “We are excited about the opportunity to regain local control of our police services. We are in the midst of a campaign to rebirth a new Compton. Having our own police department is part of the overall strategic plan to make Compton a better place to live and work.”

Dr. Paul Edward, founder of Edward Professional Advisors, says, “The Sheriff’s Department has done a great job during the past ten years in Compton, but research clearly shows that cities with strong community-based police departments are better places to live and work. The police-community relationship is crucial for quality law enforcement and we are excited to be working on this historic project.”

The opponents of Compton’s transition to local control of their police services say Compton will not be able to afford the costs that the Los Angeles County Sheriff’s Department currently spends on the police services they provide for Compton.

Compton’s City Manager, Willie Norfleet, says, “Not only will we gain local control of our police services, but our efforts will cost the citizens of Compton less while providing top quality police services.”

“As one of the few African American owned consulting firms, it is an honor to be helping Compton improve its police services. Compton is a place of great importance to the African American community and it feels wonderful to be collaborating with the citizens of Compton to improve their safety and quality of life,” says Dr. Edward.

Compton’s successful transition to locally controlled police services will not only be significant for this African American community but will serve at the blueprint for other communities around the world.

About Edward Professional Advisors:
Edward Professional Advisors is a consulting firm specializing in working with public safety agencies. The firm’s founder, Dr. Edward, is an award-winning author, experienced organizational psychologist, certified business coach, and popular university lecturer. He has made ground-breaking contributions to our understanding of how people and organizations develop and make sustained progress. Dr. Edward’s award-winning book, “Moving Forward: Turning Good Intentions into Great Results by Discovering Yourself, Your Place, & Your Path,” has helped hundreds of people live better lives. 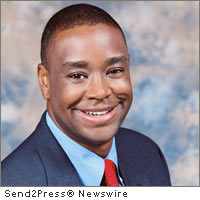 NEWS ARCHIVE NOTE: this archival news content, issued by the news source via Send2Press Newswire, was originally located in the Send2Press® 2004-2015 2.0 news platform and has been permanently converted/moved (and redirected) into our 3.0 platform. Also note the story “reads” counter (bottom of page) does not include any data prior to Oct. 30, 2016. This press release was originally published/issued: Tue, 08 Feb 2011 10:59:31 +0000

LEGAL NOTICE AND TERMS OF USE: The content of the above press release was provided by the “news source” Edward Professional Advisors or authorized agency, who is solely responsible for its accuracy. Send2Press® is the originating wire service for this story and content is Copr. © Edward Professional Advisors with newswire version Copr. © 2011 Send2Press (a service of Neotrope). All trademarks acknowledged. Information is believed accurate, as provided by news source or authorized agency, however is not guaranteed, and you assume all risk for use of any information found herein/hereupon.