LOS ANGELES, Calif., Feb. 15 (SEND2PRESS NEWSWIRE) — Laugh for Love (www.LaughforLove.org), the group that unites comedians for causes, announced the line up of funnymen to perform this Thursday, February 17, 2011 at their charity fundraiser for the homeless at the world famous Comedy Store. Joey Medina (Latin Kings of Comedy), Chris Spencer (LOL Comedy: Showtime), Jay Malone (LOL Comedy: Showtime), and Chris D’ELia (Glory Daze) round out the diverse and hilarious cast. The group aims to raise awareness and funds for a heart felt cause.

100% of all ticket sales, donations and sponsorships are donated to the Los Angeles Mission (www.losangelesmission.org), a 501(c) non-profit organization serving the homeless for 75 years. Located in downtown Los Angeles’ skid row, it began as a small rescue mission and is now among the nations largest service providers to the homeless. The Los Angeles Mission continues to provide hot meals, safe shelter, clothing, personal care, and life transforming long-term rehabilitation to hungry, hurting, and homeless, men, women and children.

The shows creator T.J. Hoban says, “If Baywatch was having an affair with Reno 911, their love child would be Venice Heat.” If you’ve seen the trailer on YouTube, you know why.

This red carpet affair starts at 7:30 p.m. this Thursday (Feb. 17). Tickets range from $20-$30. If you’d like to Laugh for Love and support the homeless, tickets and info are available at www.LaughforLove.org .

“Together we can change the world one laugh at a time.”

News issued by: Laugh for Love 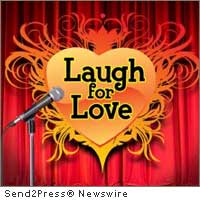 NEWS ARCHIVE NOTE: this archival news content, issued by the news source via Send2Press Newswire, was originally located in the Send2Press® 2004-2015 2.0 news platform and has been permanently converted/moved (and redirected) into our 3.0 platform. Also note the story “reads” counter (bottom of page) does not include any data prior to Oct. 30, 2016. This press release was originally published/issued: Tue, 15 Feb 2011 18:05:19 +0000

More from Laugh for Love

ABOUT THE NEWS SOURCE:
Laugh for Love

LEGAL NOTICE AND TERMS OF USE: The content of the above press release was provided by the “news source” Laugh for Love or authorized agency, who is solely responsible for its accuracy. Send2Press® is the originating wire service for this story and content is Copr. © Laugh for Love with newswire version Copr. © 2011 Send2Press (a service of Neotrope). All trademarks acknowledged. Information is believed accurate, as provided by news source or authorized agency, however is not guaranteed, and you assume all risk for use of any information found herein/hereupon.