A Chronicle of Prehistoric Times: ‘Pebbles’ by Davis Thanjan

“Pebbles deals with human history before the birth of Christ,” says author Davis Thanjan, a scientific researcher and author of “Kerala, The Legacy of Apostle Thomas in India,” and “Historic Kerala.”

“The ancient archaeological and historic sites mentioned in the book are testaments to the human accomplishments that survived more than 2,000 years, like pebbles in the sands of time,” he adds.

“Pebbles” covers historical sites from the earliest humanoid fossil sites in Africa that are more than one million years old to the great Roman and Chinese architectural buildings and monuments in the century before Christ. Each of the 15 chapters in the book contains a short summary of the time period, and the major archeological and historic sites that remain.

“Overall, Pebbles is an excellent read for any fan of history or for travelers looking to put the historical sites they visit into the proper context,” says Nigil Bloom (“The Book Critic”).

Pebbles retails at $18.95 plus shipping and handling and is available at:
* Bookstand Publishing: http://www.ebookstand.com/book_details/Pebbles or Tel: 866-793-9365.
* Amazon (http://www.amazon.com).
* Barnes and Noble (http://www.barnesandnoble.com). 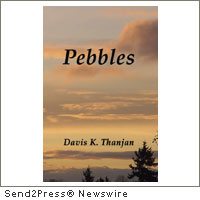 NEWS ARCHIVE NOTE: this archival news content, issued by the news source via Send2Press Newswire, was originally located in the Send2Press® 2004-2015 2.0 news platform and has been permanently converted/moved (and redirected) into our 3.0 platform. Also note the story “reads” counter (bottom of page) does not include any data prior to Oct. 30, 2016. This press release was originally published/issued: Wed, 23 Feb 2011 01:12:07 +0000