LOS ANGELES, Calif., Feb. 28 (SEND2PRESS NEWSWIRE) — “Cancer is Curable Now,” presented by Wake-Up TV, is a feature-length documentary that demonstrates the problems cancer patients face and a wide range of solutions utilizing holistic cancer treatments. It reveals patient options and busts the myth that cancer is a deadly disease.

This cancer documentary empowers patients, family members and supporters by showing how to support the body’s innate healing mechanisms.

“People need to know that they have many choices and that they can be in charge of their healing process and not be victims,” says Marcus Freudenmann, director and producer of “Cancer is Curable Now.”

Freudenmann adds, “Cancer patients are not a commodity who need more products; they need education.”

“Cancer is Curable Now” reveals that there are hundreds of non-toxic options that provide minimal, if any, side effects that work to reduce cancer dramatically, while greatly improving quality of life.

“We need to return to a common sense approach,” explains Freudenmann. “A pill for every ill is not always the answer and in most cases it only serves to intensify the problem.”

“Cancer is Curable Now” is an in-depth piece and seven chapters and 67 titles address all facets of healing cancer.

It teaches people how to avoid carcinogens; how to find a good holistic physician; and how to check if the physician is actually helpful or just following a standard protocol. It shows many treatments that are free of charge or cost a fraction of the cost of a single chemotherapy treatment, without destroying the immune system and yielding stunning results.

This cancer documentary also provides tools for mental and emotional healing; ways to problem solve; and tips for how to incorporate healthy habits into a lifestyle.

Produced by Marcus and Sabrina Freudenmann, the couple was motivated to release this documentary after watching a close friend die from the side effects of chemotherapy and radiation, while another friend cured herself from cancer using complementary methods.

“Cancer is Curable Now” is available at: http://www.wake-up.tv . 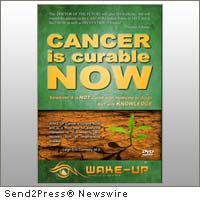 NEWS ARCHIVE NOTE: this archival news content, issued by the news source via Send2Press Newswire, was originally located in the Send2Press® 2004-2015 2.0 news platform and has been permanently converted/moved (and redirected) into our 3.0 platform. Also note the story “reads” counter (bottom of page) does not include any data prior to Oct. 30, 2016. This press release was originally published/issued: Mon, 28 Feb 2011 10:59:04 +0000

ABOUT THE NEWS SOURCE:
Wake-Up TV

LEGAL NOTICE AND TERMS OF USE: The content of the above press release was provided by the “news source” Wake-Up TV or authorized agency, who is solely responsible for its accuracy. Send2Press® is the originating wire service for this story and content is Copr. © Wake-Up TV with newswire version Copr. © 2011 Send2Press (a service of Neotrope). All trademarks acknowledged. Information is believed accurate, as provided by news source or authorized agency, however is not guaranteed, and you assume all risk for use of any information found herein/hereupon.