LAS VEGAS, Nev., March 1 (SEND2PRESS NEWSWIRE) — OneTravel is giving away grand prize trips to Istanbul during its “Tweet Your Way to Turkey” contest. Lucky winners will be awarded a grand prize trip consisting of two roundtrip tickets to Istanbul on Turkish Airlines and a five day, four night stay at the new, 4-star Edition Hotel.

There are two more trips to Istanbul up for grabs and the winners will be selected and announced on Friday, March 4th and Friday, March 11th, 2011.

To enter the contest, simply visit the OneTravel blog (http://blog.onetravel.com) and tweet for the chance to win:
1. Look for the Turkey-themed blog post daily, Monday through Thursday, on the OneTravel blog;
2. Click the “Send me to Turkey!” icon inside the blog post to automatically tweet the phrase “I’m Tweeting my way to Turkey thanks to @OneTravel”
3. Voila, you’re entered for that day;
4. Each day one tweet will be selected as a finalist for that Friday’s prize giveaway.

A unique hash tag will be used every day so check the blog diligently and tweet daily for more chances to win!

Daily finalists and weekly Friday winners will be announced on the OneTravel Blog.

Entrants must be followers of OneTravel on Twitter (http://twitter.com/onetravel) to be eligible and are limited to one tweet per day. For details on contest rules and eligibility visit the “Tweet Your Way to Turkey” contest page.

Start tweeting your way to Turkey and good luck!

About OneTravel:
OneTravel (www.onetravel.com) offers flights, hotels, and packages to top destinations throughout the world. Launched in the mid-nineties in a barn in Pennsylvania, OneTravel has grown to be one of best recognized online travel brands in the U.S. and internationally. 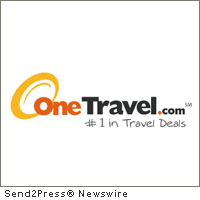 NEWS ARCHIVE NOTE: this archival news content, issued by the news source via Send2Press Newswire, was originally located in the Send2Press® 2004-2015 2.0 news platform and has been permanently converted/moved (and redirected) into our 3.0 platform. Also note the story “reads” counter (bottom of page) does not include any data prior to Oct. 30, 2016. This press release was originally published/issued: Tue, 01 Mar 2011 20:37:09 +0000

ABOUT THE NEWS SOURCE:
OneTravel

LEGAL NOTICE AND TERMS OF USE: The content of the above press release was provided by the “news source” OneTravel or authorized agency, who is solely responsible for its accuracy. Send2Press® is the originating wire service for this story and content is Copr. © OneTravel with newswire version Copr. © 2011 Send2Press (a service of Neotrope). All trademarks acknowledged. Information is believed accurate, as provided by news source or authorized agency, however is not guaranteed, and you assume all risk for use of any information found herein/hereupon.