NEW YORK, N.Y., March 2 (SEND2PRESS NEWSWIRE) — CheapOair launched two additions to its site, the Top 50 Destinations and the Top 25 City Pairs pages. The lists tally travel trend data on the Top 50 Destinations and Top 25 Travel Routes most searched by customers on CheapOair.com as well as the lowest fares to those cities. Each Tuesday morning the lists are updated so it’s easy to stay in touch with current hot spots – both domestically and internationally. Changes in week over week popularity are also displayed to see which destinations are trending at all times.

Consumers can use the information as a tool to gauge popular destinations and make educated travel selections. CheapOair will also include subsequent deals to the leading destinations featured on these pages, offering the lowest fares by pulling from over 100 million airfare combinations on over 400 airlines. A special promotion of up to $50 off is being offered by using PR50 discount code, to commemorate the launch of the new landing pages. Additionally, industry professionals can utilize this new information as research to stay competitive in their fields.

Top Domestic Destinations 1Q 2010 vs. 1Q 2011:
Florida destinations remain popular, with five of the top ten 2011 domestic flights being booked to Florida cities. Orlando has surpassed Las Vegas for most booked destination in 1Q 2011 vs 1Q 2010 along with several Florida cities moving up the list, most likely due to severe weather the country faced in January. Las Vegas and Los Angeles still remain in the top three, while San Francisco has been replaced by Denver in 10th place. More info: http://www.cheapoair.com/top-50-destinations .

Top International Destinations 1Q 2010 vs. 1Q 2011:
Cancun remains the top international destination year over year and the top 10 list continues to be dominated by warm weather and resort destinations in Mexico, Jamaica and Costa Rica. New for 2011 include more exotic destination such as the Port of Spain and Bangkok which have replaced Paris and Frankfurt in the top 10.

Top City Pairs in 2010 vs. 2011:
The January cold weather and snow storms have impacted the top 10 travel routes booked on 2011 vs 2010, with a greater number of departures being from Minneapolis, Detroit and Boston – all cities that were heavily hit during the snow storms. More info: http://www.cheapoair.com/top-25-city-pairs .

About CheapOair:
CheapOair is a top 10 online travel booking site and a leading supplier of airfares, hotels, car rentals and vacation packages. Backed by Travelong, which ranked 13th in the industry in Travel Weekly’s esteemed 2010 “Power List,” CheapOair offers the best in value with attractive solutions for today’s savvy traveler. Their portfolio of products include over 100 million airfare combinations on over 400 airlines, low airfare guarantees, 100,000 negotiated hotel rates and the technological foundation to deliver affordable tickets to every region in the world. Current domestic and international travel trends are available at Top 50 Destinations (http://www.cheapoair.com/top-50-destinations) and Top 25 City Pairs (http://www.cheapoair.com/top-25-city-pairs). 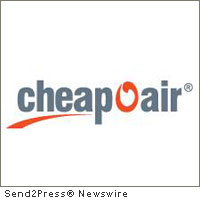 NEWS ARCHIVE NOTE: this archival news content, issued by the news source via Send2Press Newswire, was originally located in the Send2Press® 2004-2015 2.0 news platform and has been permanently converted/moved (and redirected) into our 3.0 platform. Also note the story “reads” counter (bottom of page) does not include any data prior to Oct. 30, 2016. This press release was originally published/issued: Wed, 02 Mar 2011 19:33:23 +0000

ABOUT THE NEWS SOURCE:
CheapOair

LEGAL NOTICE AND TERMS OF USE: The content of the above press release was provided by the “news source” CheapOair or authorized agency, who is solely responsible for its accuracy. Send2Press® is the originating wire service for this story and content is Copr. © CheapOair with newswire version Copr. © 2011 Send2Press (a service of Neotrope). All trademarks acknowledged. Information is believed accurate, as provided by news source or authorized agency, however is not guaranteed, and you assume all risk for use of any information found herein/hereupon.