SEATTLE, Wash., March 15 (SEND2PRESS NEWSWIRE) — CORRECTION: On March 9, Trans Marine Propulsion Systems (TMPS) issued a press release that included errors, corrected here. The release stated that TMPS had secured a sales and service agreement from Valley Power Systems for the Volvo Penta Industrial Diesel line, and that TMPS will be providing sales and service for the west coast of the United States, which includes Alaska and Hawaii, and to British Columbia, Canada. The agreement does NOT include British Columbia, Canada.

“We regret these errors, which happened due to clerical error, and want to set the record straight,” says Shane Roeser, President of TMPS.

TMPS is known worldwide for their diesel service and engineering department. The company maintains locations in Seattle, Washington, and Tampa, Florida.

TMPS services most makes and types of diesel engines, including medium-speed and slow-speed engines for the marine industry and for diesel power plants. “We are one of the world’s few service facilities that offer this range of experience,” says Herbert Roeser, TMPS’s Chairman.

More information is available on Yanmar Corporation of Japan and the Volvo Penta Industrial Diesel Engine Line at www.transmarine.org or 206-282-9142.

A list of key clients and testimonials may be found at www.transmarine.org/about-us/testimonials/clients . 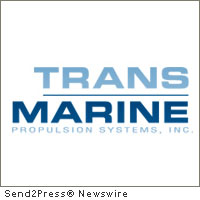 NEWS ARCHIVE NOTE: this archival news content, issued by the news source via Send2Press Newswire, was originally located in the Send2Press® 2004-2015 2.0 news platform and has been permanently converted/moved (and redirected) into our 3.0 platform. Also note the story “reads” counter (bottom of page) does not include any data prior to Oct. 30, 2016. This press release was originally published/issued: Tue, 15 Mar 2011 09:59:46 +0000

LEGAL NOTICE AND TERMS OF USE: The content of the above press release was provided by the “news source” Trans Marine Propulsion Systems, Inc. or authorized agency, who is solely responsible for its accuracy. Send2Press® is the originating wire service for this story and content is Copr. © Trans Marine Propulsion Systems, Inc. with newswire version Copr. © 2011 Send2Press (a service of Neotrope). All trademarks acknowledged. Information is believed accurate, as provided by news source or authorized agency, however is not guaranteed, and you assume all risk for use of any information found herein/hereupon.