NEW YORK, N.Y., March 25 (SEND2PRESS NEWSWIRE) — Presidential Who’s Who announced this week that one of its members, Barbara Barton, executive and nutritional coach for Isagenix®, is working to help others reach their ultimate potential and achieve their goals.

“Isagenix is the world leader in cleansing, replenishing and anti-aging,” explains Barton. “The company continues to work diligently to further advance the product’s ability to reverse the aging process and to dramatically increase health and longevity.”

Currently, Isagenix® has annual earnings of more than one billion dollars in sales. In 2008, Barton became its 24th millionaire.

“This is a great accomplishment,” says MarkAnthony McGuiness, CEO of Presidential Who’s Who, “and we did not want this milestone to go unnoticed. She is a great asset to our organization.”

About Barbara Barton:
Barton attributes her success to a positive inner attitude, persistence and hard work. Prior to becoming an independent Isagenix® Associate, she was a former Mrs. Utah and recipient of the Businesswoman of the Year Award. She also participated in the Ms. Senior America pageant in 2008.

She has worked in numerous positions that have served as the platform for her current success including serving as vice president for the Women’s Utah State Wool Growers and being vice president of the Sanpete political party. She was also the spokesperson for and served on the Board of Directors for the motivational company, Champions for Life.

As an Isagenix® Independent Associate, Barton works diligently to demonstrate that people can become younger looking. She also teaches people about the importance of rejuvenation, detox, nutriceuticals and more.

For more information, visit: www.ez2lose.isagenix.com or check out Barton’s blog at: www.weightlossandwellnessblog.com .

News issued by: Presidential Who’s Who 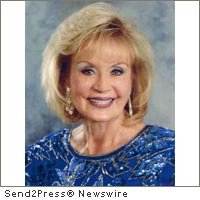 NEWS ARCHIVE NOTE: this archival news content, issued by the news source via Send2Press Newswire, was originally located in the Send2Press® 2004-2015 2.0 news platform and has been permanently converted/moved (and redirected) into our 3.0 platform. Also note the story “reads” counter (bottom of page) does not include any data prior to Oct. 30, 2016. This press release was originally published/issued: Fri, 25 Mar 2011 20:33:01 +0000

News Source: Presidential Who's Who

View Presidential Who's Who News Room

More from Presidential Who's Who

View Presidential Who's Who News Room

ABOUT THE NEWS SOURCE:
Presidential Who's Who

RSS News Feed for Presidential Who's Who

LEGAL NOTICE AND TERMS OF USE: The content of the above press release was provided by the “news source” Presidential Who's Who or authorized agency, who is solely responsible for its accuracy. Send2Press® is the originating wire service for this story and content is Copr. © Presidential Who's Who with newswire version Copr. © 2011 Send2Press (a service of Neotrope). All trademarks acknowledged. Information is believed accurate, as provided by news source or authorized agency, however is not guaranteed, and you assume all risk for use of any information found herein/hereupon.