NEW YORK, N.Y., March 30 (SEND2PRESS NEWSWIRE) — Can a reduction in helicopter vibration levels increase safety of flight and reduce its operating costs? “Absolutely,” says Eli Navon, CEO of Shake’d Technologies, Inc., a New York-based company engaged in the development, delivery and support of advanced rotary wing innovations. “Many helicopter owners and operators users have borne the cost of dynamic components failing long before their scheduled time before overhaul (TBO). Though vibrations can never be fully eliminated, the best and only effective way to ensure a helicopter’s longevity is to continue reducing its vibration levels.”

Helicopter vibration is so serious in fact, that the Federal Aviation Administration (FAA) has recently announced its plan to have all U.S.-certified rotorcraft install or be serviced using some type of mechanical condition monitoring or other maintenance actions to control or reduce vibrations. This call to action was prompted by a number of helicopter crashes caused by mechanical component failures worldwide, including many that have resulted in fatalities.

High vibration in helicopters causes severe damage to fuselage structural integrity. It also minimizes components life span and adversely affects operator comfort and control. It has been reported that most safety-related problems in various parts of the aircraft were caused by vibrations, including cracked welds, cracked fuselages, loose wiring connections, and in-flight failure of dynamic components.

“High vibrations can lead to instabilities during flight, making the control difficult and in some cases impossible. These conditions affect fuselage and dynamic component structural integrity including onboard avionics and navigation equipment that can lead to catastrophic results,” stated Maj. Gen. (Ret.) Eitan Ben Eliyahu, former Commander of the Israeli Air Force (IAF), an aviator for 38 years, and a strong supporter of the CDB program.

In response, Shake’d Technologies, Inc., has developed Customized Dynamic Balancing (CDB), an innovative process to immediately reduce overall aircraft vibration. In effect, operating and support (O&S) costs are lessened, while aircraft availability, logistics supportability and safety measures are increased. CDB is considered a “Preventive Maintenance Process,” which means that it keeps the component vibration deterioration rate low and moves component lifetime closer to TBO. The longer a dynamic component remains on-wing, the lower the operating cost to the operator. Each helicopter’s drive-train is physically balanced within its own vibration profile.

The solution requires tuning each aircraft every 200-flight hours to verify the aircraft low vibration environment. Its onboard monitoring systems can also detect unexpected behavior in vibrations and diagnose trends, ensuring a smooth and certainly safer flight.

CDB’s approach is based on holistic analysis, rather than the analysis of separate components. CDB emphasizes the importance of the dynamics of the whole drive-train, and the interaction between its inter-dependent parts instead of isolating by analyzing the drive-train by specific components. CDB supports the Condition Based Maintenance (CBM) concept by providing Reliability, Availability, and Maintainability (RAM) data that supports predictive maintenance practices based on actual conditions of dynamic components vs unscheduled maintenance. CDB is very useful in identifying and troubleshooting various material issues beyond the drive-train, it also avoids the costly “guesswork” incurred by maintainers who waste time and money trying to find the root source of a particular problem.

“This unique technology includes main rotor track and balance during ground run, so that the aircraft can be serviceable after only one test flight in the air,” Navon said. “Additionally, the solution is able to examine the health condition of each gear mesh in all gearboxes and report unusual behavior to the user.”

“By immediately reducing vibration in the drive train, and periodically checking and re-balancing the aircraft as required, the aircraft can achieve and maintain a minimum vibration profile over its life,” Navon said. “Many fatal accidents could have been prevented using technologies such as CDB.”

Experimental test pilots who have flown Apache aircraft immediately after applying CDB have told us “it has made an obvious difference, not only are the vibrations way down, the noise in the cockpit is quieter”.

Another important attribute of the CDB is its ability to integrate (in full or in part) with other health and usage monitoring systems. Since the critical part of the CDB system is software, integration efforts would mostly involve software integration engineering. Collected data can be passed to the CDB system via a digital storage device (digi-stick), or other similar means, and loaded into the technician’s computer for processing.

Since its development three years ago, CDB has successfully provided safer flights and lower cost operations to an international fleet of rotary wing aircraft. Today, Customized Dynamic Balancing is fully developed and proven to be very effective in immediately solving vibration challenges, reducing operating and support (O&S) costs and increasing both aircraft availability and logistics supportability.

For more information visit the CDB website at www.cdbdata.com . 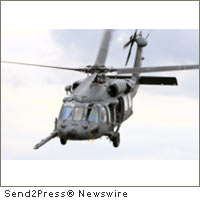 NEWS ARCHIVE NOTE: this archival news content, issued by the news source via Send2Press Newswire, was originally located in the Send2Press® 2004-2015 2.0 news platform and has been permanently converted/moved (and redirected) into our 3.0 platform. Also note the story “reads” counter (bottom of page) does not include any data prior to Oct. 30, 2016. This press release was originally published/issued: Thu, 31 Mar 2011 00:21:03 +0000

LEGAL NOTICE AND TERMS OF USE: The content of the above press release was provided by the “news source” Shake'd Technologies, Inc. or authorized agency, who is solely responsible for its accuracy. Send2Press® is the originating wire service for this story and content is Copr. © Shake'd Technologies, Inc. with newswire version Copr. © 2011 Send2Press (a service of Neotrope). All trademarks acknowledged. Information is believed accurate, as provided by news source or authorized agency, however is not guaranteed, and you assume all risk for use of any information found herein/hereupon.