WAYNE, N.J., April 7 (SEND2PRESS NEWSWIRE) — The Ballantine Corporation announced this week the launch of a new white paper – “Intelligent Mail Barcode 101.” It discusses the benefits, requirements and how it works.

Until recently, the United States Postal Service (USPS) had planned to make the Intelligent Mail Barcode (IMB) a requirement by May 2011. Despite the fact that this date has now been pushed further out, it’s still important to prepare for the changes now.

What is the IMB? It’s a barcode system devised by the USPS to sort and track pieces of mail. This new barcode provides many more benefits than the previous one.

The IMB offers improved delivery, better mail tracking and greater accountability. Two of the most important new features are: each piece of mail is now uniquely identified and tracked; and free address correction services are available. This latter feature also improves delivery and reduces cost.

“Our IMB white paper provides readers with detailed insight into how this new barcode system works,” says Ryan Cote, director of marketing for the Ballantine Corporation. “It shares specific mailer dimensions; shows people how to create and use an IMB; and explains the difference between basic and full service.”

A video that provides step-by-step instructions on how to read the IMB can be viewed here: http://www.ballantine.com/2009/07/01/read-decode-intelligent-mail-barcode/ .

News issued by: The Ballantine Corporation 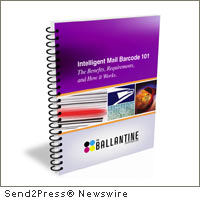 NEWS ARCHIVE NOTE: this archival news content, issued by the news source via Send2Press Newswire, was originally located in the Send2Press® 2004-2015 2.0 news platform and has been permanently converted/moved (and redirected) into our 3.0 platform. Also note the story “reads” counter (bottom of page) does not include any data prior to Oct. 30, 2016. This press release was originally published/issued: Thu, 07 Apr 2011 10:59:36 +0000

More from The Ballantine Corporation

ABOUT THE NEWS SOURCE:
The Ballantine Corporation

LEGAL NOTICE AND TERMS OF USE: The content of the above press release was provided by the “news source” The Ballantine Corporation or authorized agency, who is solely responsible for its accuracy. Send2Press® is the originating wire service for this story and content is Copr. © The Ballantine Corporation with newswire version Copr. © 2011 Send2Press (a service of Neotrope). All trademarks acknowledged. Information is believed accurate, as provided by news source or authorized agency, however is not guaranteed, and you assume all risk for use of any information found herein/hereupon.