MOUNT HOLLY, N.J., April 18 (SEND2PRESS NEWSWIRE) — As medical marijuana smokers around the globe celebrate “4/20” – an internationally recognized date for the celebration of cannabis – Ed Forchion, aka NJWeedman announced that his lawyer, John Vincent Saykanic, Esq., will be filing a historic legal brief in New Jersey’s Burlington County Superior Court, battling for not only Forchion’s freedom but for the rights and recognition of marijuana smokers everywhere (Indictment 2010-08-066-I). The filing is historic as it challenges New Jersey drug legislation and may change how the state’s medical and criminal marijuana laws are enforced.

On April 1, 2010, Ed Forchion was arrested in Mount Holly, New Jersey with a pound of cannabis in the trunk of his car. A Burlington County grand jury indicted Forchion in August of last year for violation of the State’s drug laws. In October 2010 he pleaded not guilty. He faces more than a decade in prison if convicted.

In December 2010, Superior Court Judge Charles Delehey permitted Forchion to challenge the constitutionality of the state’s marijuana laws, which makes marijuana possession illegal (and a Schedule I drug) because it purportedly has no medicinal value. At the same time, New Jersey is implementing a medical marijuana program for the treatment of needy and ill citizens since New Jersey became the 15th state to legalize the use of medical marijuana on January, 2010.

The legal brief raises eight grounds explaining why the indictment must be dismissed. These include that Forchion, as a practicing Rastafarian, should be granted a religious exemption under the First Amendment (and Equal Protection Clause) to possess marijuana since marijuana – known as ganja in the religion – operates as a sacrament and is an integral part of the Rastafarian religious ceremony.

Other issues raised in the brief are: that marijuana should no longer be classified as a Schedule I drug (with the hardest drugs such as heroin, LSD, etc.) since even New Jersey now recognizes its medicinal value; that Forchion should be able to possess the marijuana on the grounds of “medical necessity” since he is a medical marijuana patient (approved in California, one of his two residences); and that the New Jersey marijuana laws do not provide adequate notice that he could not possess his required medicine (and religious sacrament).

Saykanic says, “It’s not only un-American that Rastafarians are discriminated against for their sacred religious views, but it’s outrageous that the alleged ‘illegal’ drug that is their sacrament has now been acknowledged by the State to have great medicinal value, yet they continue to be persecuted.” 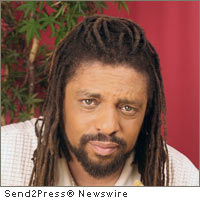 NEWS ARCHIVE NOTE: this archival news content, issued by the news source via Send2Press Newswire, was originally located in the Send2Press® 2004-2015 2.0 news platform and has been permanently converted/moved (and redirected) into our 3.0 platform. Also note the story “reads” counter (bottom of page) does not include any data prior to Oct. 30, 2016. This press release was originally published/issued: Mon, 18 Apr 2011 18:08:58 +0000

LEGAL NOTICE AND TERMS OF USE: The content of the above press release was provided by the “news source” Ed Forchion or authorized agency, who is solely responsible for its accuracy. Send2Press® is the originating wire service for this story and content is Copr. © Ed Forchion with newswire version Copr. © 2011 Send2Press (a service of Neotrope). All trademarks acknowledged. Information is believed accurate, as provided by news source or authorized agency, however is not guaranteed, and you assume all risk for use of any information found herein/hereupon.