Statewide is a broker, not a dedicated agency, and is therefore not constrained by having to provide coverage from a single insurance company. Since 1995 the company has insured thousands of contractors of all types, ranging from general to painting, electrical and wallpaper contractors.

“We operate in numerous states and have been around for more than 16 years, not to mention that we have a high volume due to our cheap rates,” stated underwriter Marcel Matar. “This has given Statewide the opportunity to negotiate very low rates with major insurance companies. The contractors we insure benefit greatly.” In addition to Oregon the company also insures contractors in California, Texas, Nevada and Minnesota.

Skyrocketing Contractors Liability Insurance Costs a Serious Problem:
The Oregon Construction Contractors Board reports on their website that they have “received hundreds of letters, faxes and e-mail messages from construction contractors who are experiencing significant price increases in their liability insurance premiums or who are finding it very difficult to find a carrier who will insure them.”

According to the Board, contractors reported “that they have been forced to consider one or more of the following actions: paying insurance premiums that have increased an average of 160 percent in the last year (in some cases 1,000 percent), raising their prices and passing the increased costs on to the client, paying lower wages to their employees, working illegally without liability insurance, leaving the state because they cannot afford insurance” or “changing the scope of their business to non-construction activities or going out of business altogether.”

Moreover, according to an article by Associated General Contractors, “2010 Economic Impact & Employment,” most construction contractors are “small or medium sized business: 94 percent employ fewer than 20 workers, 86 percent fewer than 10, and nearly 75 percent employ fewer than five workers.” They also reported that “Every $1 billion of investment in nonresidential construction supports approximately 28,500 jobs. About 1/3 are in construction, 1/6 in supplier businesses, and 1/2 are ‘induced’ jobs throughout the economy as workers and owners spend their additional income.”

In other words, escalating liability insurance premiums are having an adverse effect on the entire economy. In addition to offering low and extremely competitive insurance rates, Statewide has also streamlined the entire insurance process making it far more efficient: the initial interview takes a mere five minutes and it is possible for a contractor to get receive proof of insurance in about 30 minutes, and the entire process can be wrapped up in 60 minutes.

For more information or to get an immediate quote call Statewide at (888) 258-0272, email info@st8wide.com or visit the website at www.st8wide.com and complete a short form. 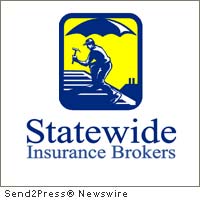 NEWS ARCHIVE NOTE: this archival news content, issued by the news source via Send2Press Newswire, was originally located in the Send2Press® 2004-2015 2.0 news platform and has been permanently converted/moved (and redirected) into our 3.0 platform. Also note the story “reads” counter (bottom of page) does not include any data prior to Oct. 30, 2016. This press release was originally published/issued: Tue, 19 Apr 2011 22:25:03 +0000

LEGAL NOTICE AND TERMS OF USE: The content of the above press release was provided by the “news source” Statewide Insurance Brokers or authorized agency, who is solely responsible for its accuracy. Send2Press® is the originating wire service for this story and content is Copr. © Statewide Insurance Brokers with newswire version Copr. © 2011 Send2Press (a service of Neotrope). All trademarks acknowledged. Information is believed accurate, as provided by news source or authorized agency, however is not guaranteed, and you assume all risk for use of any information found herein/hereupon.