WASHINGTON, D.C., April 29 (SEND2PRESS NEWSWIRE) — Newt and Callista Gingrich, in partnership with Citizens United Productions and Peace River Company, will premiere their new documentary, “A City Upon A Hill: The Spirit of American Exceptionalism,” on Friday, April 29 at the Carnegie Institute for Science in Washington, D.C.

Hosted by Newt and Callista Gingrich, the documentary reminds us that America is a unique nation founded on the truth that our rights come from God, not a king or government. This freedom has allowed Americans to accomplish some of history’s greatest achievements, developing into a model community for the rest of the world, or as John Winthrop described it in 1630, a “city upon a hill.”

“A City Upon A Hill” is Gingrich Productions’ seventh documentary. Other films include the award-winning “Nine Days that Changed the World,” “Ronald Reagan: Rendezvous with Destiny,” and “Rediscovering God in America.” Gingrich Productions is a performance and production company featuring the work of Newt and Callista Gingrich. 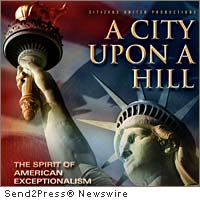 Alternate Headline: New documentary premiere: A City Upon A Hill: The Spirit of American Exceptionalism

NEWS ARCHIVE NOTE: this archival news content, issued by the news source via Send2Press Newswire, was originally located in the Send2Press® 2004-2015 2.0 news platform and has been permanently converted/moved (and redirected) into our 3.0 platform. Also note the story “reads” counter (bottom of page) does not include any data prior to Oct. 30, 2016. This press release was originally published/issued: Fri, 29 Apr 2011 17:40:24 +0000

ABOUT THE NEWS SOURCE:
Gingrich Productions

LEGAL NOTICE AND TERMS OF USE: The content of the above press release was provided by the “news source” Gingrich Productions or authorized agency, who is solely responsible for its accuracy. Send2Press® is the originating wire service for this story and content is Copr. © Gingrich Productions with newswire version Copr. © 2011 Send2Press (a service of Neotrope). All trademarks acknowledged. Information is believed accurate, as provided by news source or authorized agency, however is not guaranteed, and you assume all risk for use of any information found herein/hereupon.