Big Eye Gallery in Collaboration with The Kobal Collection and The Film Society Lincoln Center announces: Elizabeth, The Golden Age

NEW YORK, N.Y., May 9, 2011 (SEND2PRESS NEWSWIRE) — Big Eye Gallery in collaboration with The Kobal Collection and The Film Society Lincoln Center, announced today the details of their upcoming art exhibit of classic images from film legend Elizabeth Taylor’s life. The exhibit, at the Frieda and Roy Furman Gallery adjacent to the Walter Reade Theatre, will run from May 20 to June 9, 2011.

The show will commemorate the first retrospective of Taylor’s work in New York following her recent passing. Big Eye Gallery in collaboration with the Kobal Collection have teamed up with FSLC to display a photo exhibit of some of the most iconic images of the screen icon.

About The Kobal Collection:
The Kobal Collection is delighted to have been closely associated with the Film Society of Lincoln Center for over 20 years, supplying images for a wide range of publications and events from its archive of over 1.5 million movie stills. Go to http://www.kobal-collection.com (redirects to www.picture-desk.com) for further information.

About The Film Society of Lincoln Center:
The Film Society of Lincoln Center was founded in 1969 to celebrate American and international cinema, to recognize and support new directors, and to enhance the awareness, accessibility and understanding of film. Advancing this mandate today, the Film Society hosts two distinguished festivals. The New York Film Festival annually premieres films from around the world and has introduced the likes of Francois Truffaut, R.W. Fassbinder, Jean-Luc Godard, Pedro Almodovar, Martin Scorsese, and Wong Kar-Wai to the United States. New Directors/New Films, co-presented by the Museum of Modern Art, focuses on emerging film talents. Since 1972, when the Film Society honored Charles Chaplin, its annual Gala Tribute celebrates an actor or filmmaker who has helped distinguish cinema as an art form. Additionally, the Film Society presents a year-round calendar of programming at its Walter Reade Theater and offers insightful film writing to a worldwide audience through Film Comment magazine. For more information about the Film Society of Lincoln Center’s film schedule, please go to www.FilmLinc.com . 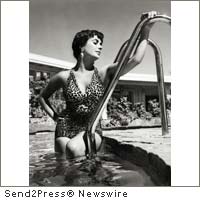 NEWS ARCHIVE NOTE: this archival news content, issued by the news source via Send2Press Newswire, was originally located in the Send2Press® 2004-2015 2.0 news platform and has been permanently converted/moved (and redirected) into our 3.0 platform. Also note the story “reads” counter (bottom of page) does not include any data prior to Oct. 30, 2016. This press release was originally published/issued: Mon, 09 May 2011 20:50:00 +0000

LEGAL NOTICE AND TERMS OF USE: The content of the above press release was provided by the “news source” Big Eye Gallery LLC or authorized agency, who is solely responsible for its accuracy. Send2Press® is the originating wire service for this story and content is Copr. © Big Eye Gallery LLC with newswire version Copr. © 2011 Send2Press (a service of Neotrope). All trademarks acknowledged. Information is believed accurate, as provided by news source or authorized agency, however is not guaranteed, and you assume all risk for use of any information found herein/hereupon.