“In the twenty-first century, copyright affects us all,” says Professor Tehranian. “With networked PCs and mobile smartphones, we all have the equivalent of a printing press at our disposal and may access and manipulate copyrighted content from around the world in the blink of an eye. Yet, current copyright laws were mostly written before the dawn of the digital era and they’ve failed to keep pace with critical technological changes. As a result, we’ve unwittingly become a nation of infringers.”

“Infringement Nation” presents a rollicking and accessible analysis of the history and evolution of copyright law and its profound impact on the lives of ordinary individuals in the twenty-first century by asking a simple, but surprising, question: could you be committing $4.5 billion in copyright infringements each year?

Mark A. Lemley, William H. Neukom Professor at Stanford Law, writes, “John Tehranian’s witty, engaging book suggests that the answer might be yes, and explains why the fault lies not with you, but with the copyright laws.”

Organized around the theme of the individual in five different copyright-related contexts – an infringer, transformer, pure user, creator and reformer – “Infringement Nation” charts the changing contours of copyright regime and assesses its vitality in the digital age.

In the process, Professor Tehranian challenges some of the most basic assumptions about copyright law by highlighting the unseemly amount of infringement liability an average person rings up daily; the counterintuitive role of the fair use doctrine in radically expanding the copyright monopoly; and the under appreciated expressive interests at play in the consumption of copyrighted works.

He also discusses the surprisingly low level of protection that American copyright law grants many creators; and the growing role of copyright law in the exertion of social regulation.

Drawing upon theory and personal experiences litigating high-profile infringement suits involving the works of such luminaries as Jimi Hendrix, Winston Churchill, Don Henley and others, Professor Tehranian supports his arguments with a rich array of diverse examples. In the process, he touches on the unusual origins of Nirvana’s “Smells Like Teen Spirit” and the question of numeracy among Amazonian hunter-gatherers, while documenting the history of stand-offs at papal nunciatures and contemplating Ashley Wilkes’s orientation, Captain Kirk’s reincarnation, and Holden Caulfield’s maturation.

“Somewhere along the line copyright became a law everyone breaks,” observes Tim Wu, author of “Master Switch: The Rise and Fall of Information Empires.” “Why that happened and what might be done is the topic of this lively and thoughtful work.”

More information, including a blog on the latest developments in entertainment and intellectual property law, are available at: http://www.infringementnation.com .

About the Author:
John Tehranian is an academic, attorney and author. He has served as a tenured Professor of Law at the University of Utah, S.J. Quinney College of Law. In the fall of 2011, he will join Southwestern Law School and the Biederman Entertainment and Media Law Institute as the Irwin R. Buchalter Professor of Law. A graduate of Harvard University and Yale Law School, he is a founding partner of One LLP – an entertainment and intellectual property firm in Southern California known for handling high-profile copyright litigation. He is also the author of “Whitewashed” (New York University Press, 2009). 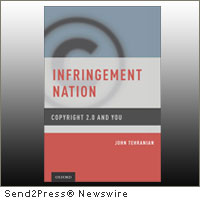 NEWS ARCHIVE NOTE: this archival news content, issued by the news source via Send2Press Newswire, was originally located in the Send2Press® 2004-2015 2.0 news platform and has been permanently converted/moved (and redirected) into our 3.0 platform. Also note the story “reads” counter (bottom of page) does not include any data prior to Oct. 30, 2016. This press release was originally published/issued: Wed, 11 May 2011 08:57:00 +0000

LEGAL NOTICE AND TERMS OF USE: The content of the above press release was provided by the “news source” Oxford University Press or authorized agency, who is solely responsible for its accuracy. Send2Press® is the originating wire service for this story and content is Copr. © Oxford University Press with newswire version Copr. © 2011 Send2Press (a service of Neotrope). All trademarks acknowledged. Information is believed accurate, as provided by news source or authorized agency, however is not guaranteed, and you assume all risk for use of any information found herein/hereupon.