SJ is best known for his U.S. AC chart-climbing folkie ballad, “I Like You,” which is also currently a Top 20 song on Sirius XM’s The Coffeehouse Channel’s charts. It has won awards in Hollywood and England, and is gaining popularity on Australian radio. SJ, also fluent in Spanish, released a Spanish-language version of his single, which has just been nominated as one of 14 finalists in the Latin category (out of thousands) in Nashville’s prestigious International Songwriting Contest.

The pre-release of “Coffee” rounds out SJ’s successful 3-month coast-to-coast U.S. tour. Sirius XM’s The Coffeehouse will air an exclusive 30-minute segment of SJ performing live on May 19, 2011, at 12 a.m. and 12 p.m. EDT. The album will fully launch in 2012 with national and international tour dates TBD.

About SJ:
SJ’s back story is a bit unorthodox but quite interesting. He’s pursuing his music because it’s his passion, and while still young enough he has left behind a career as an established international corporate attorney, previously representing the likes of Fortune 100 companies. He’s a self-motivated indie artist through and through, and he created his trademarked brand Acoustic Soul to rollout his independent, strategic DIY vision for his music in today’s new music industry. The combination of SJ’s catchy hooks, acoustic chops, soulful voice, chill spirit, business acumen and rapidly growing fan base has him poised for national and international popularity. 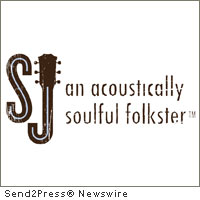 NEWS ARCHIVE NOTE: this archival news content, issued by the news source via Send2Press Newswire, was originally located in the Send2Press® 2004-2015 2.0 news platform and has been permanently converted/moved (and redirected) into our 3.0 platform. Also note the story “reads” counter (bottom of page) does not include any data prior to Oct. 30, 2016. This press release was originally published/issued: Wed, 11 May 2011 18:17:48 +0000

LEGAL NOTICE AND TERMS OF USE: The content of the above press release was provided by the “news source” Acoustic Soul Records or authorized agency, who is solely responsible for its accuracy. Send2Press® is the originating wire service for this story and content is Copr. © Acoustic Soul Records with newswire version Copr. © 2011 Send2Press (a service of Neotrope). All trademarks acknowledged. Information is believed accurate, as provided by news source or authorized agency, however is not guaranteed, and you assume all risk for use of any information found herein/hereupon.