Each year, the highly anticipated Syrah Shoot-Out hosts a small gathering of winemakers who come together to blind-taste and rate Syrahs made by their peers. This year thirty-nine 2008 Syrahs from around the world were blind-tasted and judged by fellow winemakers, and Westerhold’s 2008 Bennett Valley Syrah took top honors.

After hearing the final tally Winemaker Russell Bevan proudly proclaimed, “We liked kicking butt so much last year we did it again. We are so proud of our 2008 Westerhold Family Syrah.” Bevan is only the second winemaker to have back-to-back wins in the Shoot-out in the event’s nineteen year history.

Owner John Westerhold said, “After our 2007 Syrah won the competition last year we couldn’t wait to see how our 2008 Syrah would do. It’s such an honor for us to win again and an awesome accomplishment by Russell.”

HdR, as it is affectionately known by the thousands of almost fanatically devoted attendees of an event that manages to combine serious wine tasting and irreverent fun, is a non-profit organization that focuses on the promotion of the twenty-two Rhone wine varieties.

Westerhold Family Vineyards is located southeast of Santa Rosa in the Bennett Valley AVA of Sonoma County, and is dedicated to the production of cool-climate, estate grown Syrah. Their inaugural 2007 vintage won them their first Syrah Shoot-out last year. The Westerholds’ philosophy is that great wine always starts in the vineyard, and theirs benefits from the well-drained, mountain benchland soils, early morning fog and cool marine breezes in the afternoon that create ideal conditions for growing exceptional cool-climate varieties like Syrah.

Winemaker Russell Bevan has his own brand, Bevan Cellars, and has garnered high praise from The Wine Spectator and Robert Parker of the Wine Advocate, consistently scoring in the mid to high 90s point range. He is also winemaker for a handful of additional Northern California boutique labels. 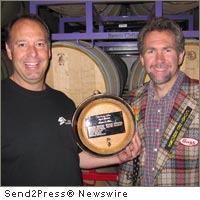 Alternate Headline: For the second year in a row Westerhold Family Vineyards and Winemaker Russell Bevan Win at 2011 Syrah Shoot-Out at the Hospice du Rhone Celebration

NEWS ARCHIVE NOTE: this archival news content, issued by the news source via Send2Press Newswire, was originally located in the Send2Press® 2004-2015 2.0 news platform and has been permanently converted/moved (and redirected) into our 3.0 platform. Also note the story “reads” counter (bottom of page) does not include any data prior to Oct. 30, 2016. This press release was originally published/issued: Thu, 12 May 2011 10:58:01 +0000

LEGAL NOTICE AND TERMS OF USE: The content of the above press release was provided by the “news source” Westerhold Family Vineyards or authorized agency, who is solely responsible for its accuracy. Send2Press® is the originating wire service for this story and content is Copr. © Westerhold Family Vineyards with newswire version Copr. © 2011 Send2Press (a service of Neotrope). All trademarks acknowledged. Information is believed accurate, as provided by news source or authorized agency, however is not guaranteed, and you assume all risk for use of any information found herein/hereupon.