AUSTIN, Texas, May 17, 2011 (SEND2PRESS NEWSWIRE) — A new app released by Flvorful Games (flvorfulgames.com) that allows users to simply control their VLC media player libraries is now available on the Apple App Store. Velcro, available for iPhone and iPod touch, aims to provide a simple interface for users to browse playlists and control video by connecting to their VLC library.

A “search” option makes it easy to find and play a specific video in seconds, even if thousands of files are contained within the VLC library.

The free app also has a bookmarking function so that users with complicated filing systems can easily find VLC directories.

To make setup of the application less technically complicated, Velcro automatically looks for and adds VLC servers that are on the network it is connected to.

It is also possible for users to manually look for and add servers.

CEO and chief developer Jake Varghese said: “Velcro has a fantastic interface which is simple to use, even for the most technically challenged of users.”

“VLC is a popular media player and there are a couple of apps available on the market right now that can control it, but they all cost money and most are rather complicated.”

“Velcro is ideal for people who just want to control their library without complicated features getting in the way. It’s free too, which is always a plus!”

Velcro is available to download for free now from the Apple App Store for iPhone and iPod touch. More information is available at: http://www.flvorfulgames.com/velcro . 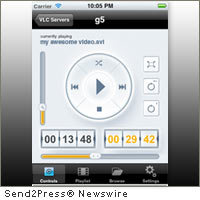 NEWS ARCHIVE NOTE: this archival news content, issued by the news source via Send2Press Newswire, was originally located in the Send2Press® 2004-2015 2.0 news platform and has been permanently converted/moved (and redirected) into our 3.0 platform. Also note the story “reads” counter (bottom of page) does not include any data prior to Oct. 30, 2016. This press release was originally published/issued: Tue, 17 May 2011 10:59:03 +0000

ABOUT THE NEWS SOURCE:
Flvorful Games

LEGAL NOTICE AND TERMS OF USE: The content of the above press release was provided by the “news source” Flvorful Games or authorized agency, who is solely responsible for its accuracy. Send2Press® is the originating wire service for this story and content is Copr. © Flvorful Games with newswire version Copr. © 2011 Send2Press (a service of Neotrope). All trademarks acknowledged. Information is believed accurate, as provided by news source or authorized agency, however is not guaranteed, and you assume all risk for use of any information found herein/hereupon.