NEW YORK, N.Y., May 19, 2011 (SEND2PRESS NEWSWIRE) — Masterseek Corporation, headquartered in New York, has announced the upcoming private placement of 3 million new shares at an expected price of $8.60 per share, for total expected proceeds of at least $25 million. Masterseek™ currently has 30 million outstanding shares, valued at about $9 each, implying a current value of about $270 million for this B2B search engine and business information platform.

With shareholders in agreement, the Board of Directors of Masterseek had approved the capital increase, with the proceeds from the private offering to be dedicated to the launch of the company’s newly-developed B2B group-buying and “deals” venture.

According to Masterseek executives, the issue is expected to be fully subscribed. By good fortune, the timing of the Masterseek private placement coincides with the upcoming IPO announced by LinkedIn, which is a larger company dominant in a parallel space. Analysts view the LinkedIn IPO as being especially good news for Masterseek, since it serves to highlight the strong synergy and linkage between the two platforms – Masterseek is the preeminent B2B search and business information platform, while LinkedIn is the premier business-oriented social network platform.

Since the launch of Masterseek.com Beta Version in March of 2011, the company has been drawing attention from users and investors alike, since the new version offers a seamless interface that harnesses social media networking, business networking and business searching together in a single potent platform.

The same market enthusiasm driving the LinkedIn IPO seems to have benefited Masterseek as well, since the company offers the “missing link” between social media like Twitter and business networking like LinkedIn. Since searching is a fundamental functionality for both business and personal networking, Masterseek’s ability to bridge between the two worlds seems likely to continue to attract attention from techies and investors alike.

The offering period for the new shares will expire on June 26, and the results of the offering are to be announced on June 28, 2011. 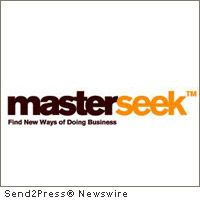 NEWS ARCHIVE NOTE: this archival news content, issued by the news source via Send2Press Newswire, was originally located in the Send2Press® 2004-2015 2.0 news platform and has been permanently converted/moved (and redirected) into our 3.0 platform. Also note the story “reads” counter (bottom of page) does not include any data prior to Oct. 30, 2016. This press release was originally published/issued: Thu, 19 May 2011 20:45:05 +0000

ABOUT THE NEWS SOURCE:
Masterseek Corporation

LEGAL NOTICE AND TERMS OF USE: The content of the above press release was provided by the “news source” Masterseek Corporation or authorized agency, who is solely responsible for its accuracy. Send2Press® is the originating wire service for this story and content is Copr. © Masterseek Corporation with newswire version Copr. © 2011 Send2Press (a service of Neotrope). All trademarks acknowledged. Information is believed accurate, as provided by news source or authorized agency, however is not guaranteed, and you assume all risk for use of any information found herein/hereupon.