NEW YORK, N.Y., June 1, 2011 (SEND2PRESS NEWSWIRE) — ForeclosureListings.com has noticed falling and rising trends in foreclosures in recent months. Why? When the supply of homes outweighs the demand for them, the prices shrink. When the values are attractive enough to investors with enough money to withstand the smaller return on the investment, the supply is reduced and the prices sustain at a present level until the next surge of depressed properties are on the market available at discounted prices.

This cycle of surges of many available discounted homes in foreclosure and the purchasing of them continues similar to the stop-and-go of traffic at the change of lights from red to green and back.

ForeclosureListings reports that Phoenix, Arizona, is the top city in foreclosure rates. But since March of 2011, the number of foreclosure listings is falling in a huge proportion, reflecting the surges of foreclosed properties on the market after months of processing the paperwork and verifying information:
March: 1.168 listings
April: 1.081 (-7.45%)
May: 980 (-9.34%).

Foreclosures account for around 40 percent of total home sales in Tucson now. Tucson was one of the cities hit hard and fast at the beginning of the housing meltdown, and will likely be one of the first to bottom out and rebound. A buyer can pay $325 per month for a two-bedroom home if they can get approved for financing, for example, due to the depressed prices that have leveled the number of homes that have already been processed. This indicates a swing in the trend from foreclosures to purchases. 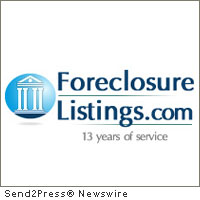 NEWS ARCHIVE NOTE: this archival news content, issued by the news source via Send2Press Newswire, was originally located in the Send2Press® 2004-2015 2.0 news platform and has been permanently converted/moved (and redirected) into our 3.0 platform. Also note the story “reads” counter (bottom of page) does not include any data prior to Oct. 30, 2016. This press release was originally published/issued: Wed, 01 Jun 2011 08:50:01 +0000

LEGAL NOTICE AND TERMS OF USE: The content of the above press release was provided by the “news source” ForeclosureListings.com or authorized agency, who is solely responsible for its accuracy. Send2Press® is the originating wire service for this story and content is Copr. © ForeclosureListings.com with newswire version Copr. © 2011 Send2Press (a service of Neotrope). All trademarks acknowledged. Information is believed accurate, as provided by news source or authorized agency, however is not guaranteed, and you assume all risk for use of any information found herein/hereupon.