OLD SAYBROOK, Conn., June 2, 2011 (SEND2PRESS NEWSWIRE) — The Turtle Conservation Project (TCP) wants your turtle pictures. “With so many people able to send an image right from their cell phone, we can quickly tell them which of Connecticut’s nine turtle species they have encountered,” said TCP’s Chuck Landrey.

“Plus we will send back a complete description of that species and its habitat needs, to educate folks about these amazing creatures.”

Send an image of any turtle you observe to turtleatlas@gmail.com for quick identification and advice.

In June Connecticut’s turtles greatly increase their movements as they seek out new habitat, mates and nesting sites.

Photos and detailed information on turtle sightings can also be entered online in less than three minutes at http://www.ctturtleatlas.com . It includes an interactive map that lets you pinpoint exactly where the turtle was found.

“We encourage people to also enter photos of car-killed turtles,” said Landrey. “We want to document where there are concentrations of turtles crossing roads. As hard as it is to look at those pictures, photographic evidence is essential.” 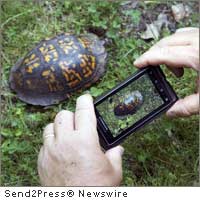 NEWS ARCHIVE NOTE: this archival news content, issued by the news source via Send2Press Newswire, was originally located in the Send2Press® 2004-2015 2.0 news platform and has been permanently converted/moved (and redirected) into our 3.0 platform. Also note the story “reads” counter (bottom of page) does not include any data prior to Oct. 30, 2016. This press release was originally published/issued: Thu, 02 Jun 2011 19:32:03 +0000

LEGAL NOTICE AND TERMS OF USE: The content of the above press release was provided by the “news source” Turtle Conservation Project or authorized agency, who is solely responsible for its accuracy. Send2Press® is the originating wire service for this story and content is Copr. © Turtle Conservation Project with newswire version Copr. © 2011 Send2Press (a service of Neotrope). All trademarks acknowledged. Information is believed accurate, as provided by news source or authorized agency, however is not guaranteed, and you assume all risk for use of any information found herein/hereupon.