AUSTIN, Texas, June 2, 2011 (SEND2PRESS NEWSWIRE) — As other cities and states are crawling at a snail’s pace toward economic recovery, Austin, Texas has been deemed “recession proof” and boasts the “second-strongest job market in the nation.” The capital of the Lone Star state continues to attract people from all over the world. The city’s fastest growing real estate company, Realty Austin, is shaking up the way these relocators embark on their Austin home search.

“We hit record sales last year, no doubt about it,” said Jonathan Boatwright, co-founder of Realty Austin. The real estate firm doubled their office space twice in one year to make room for their growing team of agents and just settled into their new downtown office.

Realty Austin attributes these wildly successful past few years to aggressive branding and marketing, innovative technologies and systems, quality website development and their agents’ top-tier service. “While other agencies are complaining that there is no business out there, a lot of Realty Austin agents are seeing their highest annual sales yet,” said Realty Austin agent Kevin Wilhelm, whose sales jumped 25 percent from last year.

The Boatwrights say they broke the mold of the traditional agency recruiting model and focus on snatching up the best in the business rather than building an army of agents. Realty Austin handpicks their agents from the top 20 percent of Austin real estate experts.

Realty Austin agent Todd Grossman says the firm owes its success in part to its focus on relationship-building. “This company cares about quality customer service and taking care of clients, not just selling real estate.”

“We are paving the way to the new business model and the clients can see that,” REALTOR® Kevin Wilhelm said. “We show them some of the technologies we use and it kind of blows them away.” They created a proprietary mobile lead generation system and have streamlined processes that take over each agent’s marketing with automated, personalized systems and a cloud computing database platform for contact management. They also use QR codes on their advertisements and business cards that link to their website.

The Realty Austin website – www.RealtyAustin.com – is the most widely used local brokerage website in Austin with over 5,000 visits daily. A story in the Austin Business Journal recently highlighted how the company vaulted to the top of web-based lead generation in their industry.

“The biggest differentiator for the firm is their emphasis on quality web development,” agent Todd Grossman said. “That’s where Realty Austin has excelled where other companies tend to drop the ball. Our site is so popular because it’s so easy to use. You don’t need to be a techie to understand it.”

Boatwright says that as other local businesses have been quick to cut marketing and advertising budgets, Realty Austin doubled down and invested in their brand and online presence. They say their die-hard commitment to out-of-the-box marketing and their partnership with boutique ad agency MDS Advertising pushed them over the edge (www.MDSadvertising.com). “Our ads are vibrant, fresh, and they run with the times instead of the dated ads that most companies create,” Grossman said. “It’s all about getting our name out there in full force.”

Austin’s top real estate companies are national franchise chains, but the Boatwrights believe Austinites and local REALTORS® are beginning to see these national chains in a different light.

“We are growing much faster than the national brands in Austin,” Boatwright said. “When the market changed as quickly as it did, many of the real estate franchise chains had to tighten their belts by raising their fees and reducing their services. We are locally-owned and operated and committed exclusively to the Austin-area, so our specialization allows us to stay on our toes and be an innovator in the industry.”

Realty Austin now employs more than 60 agents who were formerly with national realty chains, including Kevin Wilhelm who just celebrated his record year with Realty Austin. “Big franchises are just in survival mode, whereas Realty Austin is in adapt, change and grow mode because the market is changing,” Wilhelm said. “When I left the franchise for Realty Austin, it was like I went from piloting a big cruise ship to a sleek speedboat. I’m so glad I made the move.” 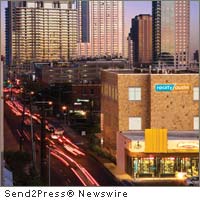 NEWS ARCHIVE NOTE: this archival news content, issued by the news source via Send2Press Newswire, was originally located in the Send2Press® 2004-2015 2.0 news platform and has been permanently converted/moved (and redirected) into our 3.0 platform. Also note the story “reads” counter (bottom of page) does not include any data prior to Oct. 30, 2016. This press release was originally published/issued: Thu, 02 Jun 2011 21:39:37 +0000

ABOUT THE NEWS SOURCE:
Realty Austin

LEGAL NOTICE AND TERMS OF USE: The content of the above press release was provided by the “news source” Realty Austin or authorized agency, who is solely responsible for its accuracy. Send2Press® is the originating wire service for this story and content is Copr. © Realty Austin with newswire version Copr. © 2011 Send2Press (a service of Neotrope). All trademarks acknowledged. Information is believed accurate, as provided by news source or authorized agency, however is not guaranteed, and you assume all risk for use of any information found herein/hereupon.