Lost In Between Dimensions – Saga II: An Action Packed Science Fiction Novel At Its Best

CHICAGO, Ill., June 6, 2011 (SEND2PRESS NEWSWIRE) — An exciting new novel about inter-dimensional space travel, sexy aliens, a space confederation on the brink of civil war, and computer engineers looking for a way home, has just been released by Bookstand Publishing. “Lost In Between Dimensions – Saga II” (ISBN: 978-1-58909-731-5), is a compelling science fiction novel you don’t want to miss.

“In Saga I of Lost in Between Dimensions, the young computer experts from the Herman Company have been lured to another dimension with promises of success, wealth, girls and more by the Emperor of the Great Vaporich Empire who wants to use the men to establish his own Internet computer system to expand his empire. Now in Saga II, Al, Ed, George, Jim. John, Raul and Rich, urgently want to find a way home to earth, but find they are forced to work for the Emperor whose empire is teetering on the brink of civil war.”

Lost In Between Dimensions – Saga II is available in both Paperback and Hardcover editions and can be ordered from: http://www.LostInBetweenDimensions.com . The book is also available at http://www.amazon.com and http://www.barnesandnoble.com .

A video trailer for the book can be viewed at: http://www.youtube.com/watch?v=MbJ2dvCker4 . 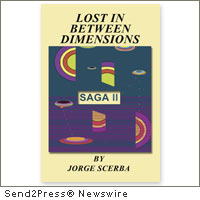 NEWS ARCHIVE NOTE: this archival news content, issued by the news source via Send2Press Newswire, was originally located in the Send2Press® 2004-2015 2.0 news platform and has been permanently converted/moved (and redirected) into our 3.0 platform. Also note the story “reads” counter (bottom of page) does not include any data prior to Oct. 30, 2016. This press release was originally published/issued: Mon, 06 Jun 2011 20:59:19 +0000