Originally incorporated in February 1910 by W. D. Boyce, the Boy Scouts of America (BSA) has become one of the nation’s largest and most prominent values-based youth development organizations. The BSA provides a program for young people that builds character, trains them in the responsibilities of participating citizenship, and develops personal fitness.

The mission of the Boy Scouts of America is to prepare young people to make ethical and moral choices over their lifetimes by instilling in them the values of the Scout Oath and Scout Law. For nearly a century, the BSA has helped build the future leaders of America by combining educational activities and lifelong values with fun.

“The Boy Scouts of America prepares young people for life by providing the nation’s foremost youth program of character development and values-based leadership training,” said Brad Farmer, Assistant Chief Scout Executive, BSA. “With 2.7 million youth members and more than a million volunteers the BSA serves America through millions of service hours each year. We are grateful for our supporters’ gifts of time and resources which allow us to continue our mission and to help develop our nation’s future leaders.”

“The Boy Scouts of America teach our youth to become responsible and productive members of our communities,” said Callista Gingrich, President of the Gingrich Foundation. “Newt and I encourage all Americans to support the valuable work they do in helping to develop our next generation of leaders.”

The Boy Scouts of America believes that preparing young people for life, in areas of education, leadership and service – all with a spirit of adventure – is the key to building a more conscientious, responsible, and productive society. Through various programs, including Cub Scouts, Boy Scouts and Venturing and other tools like the award-winning Boys’ Life, which has for 100 years chronicled Scouting’s commitment to give young Americans the tools, experiences and knowledge they need to make the world a better place, Boy Scouts of America offers opportunities for young people to learn about education, leadership, community, character, and service. In addition to supporting and teaching youth in the United States, Boy Scout councils also provide service to American citizens living abroad.

Get Involved in Scouting: https://beascout.scouting.org/ .

Support Scouting by becoming an alumnus of the Boy Scouts of America: http://www.scoutingfriends.org/site/apps/custom/bsa/find.asp?c=ekLPK7MOIpG&b=394503 . 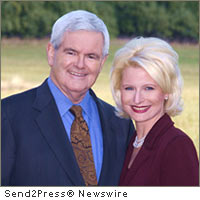 Alternate Headline: The Gingrich Foundation has selected the Boy Scouts of America as Charity of the Month for June

NEWS ARCHIVE NOTE: this archival news content, issued by the news source via Send2Press Newswire, was originally located in the Send2Press® 2004-2015 2.0 news platform and has been permanently converted/moved (and redirected) into our 3.0 platform. Also note the story “reads” counter (bottom of page) does not include any data prior to Oct. 30, 2016. This press release was originally published/issued: Thu, 09 Jun 2011 19:47:59 +0000