“Having noticed that births are often announced from cell phones by text messaging, we created bambinapp as an alternative to allow users to send a colorful, stylish electronic announcement,” said Charles Massin, co-founder of “des p’tits bonheurs.”

With bambinapp, creating and sending a birth announcement is easy, quick, and fun. Parents begin by choosing their announcement from 30 unique formats. Then they enter the birth information, and can naturally include a photo. The announcement that is created can be shared on Facebook or by email, or saved as an image file in the photo album, to be sent by MMS or other third-party service.

According to Valerie Massin-Hagin, artistic director, “The iPhone screen highlights the vibrant colors, adding magic and joy to the birth announcement e-card.”

Bambinapp is a free application that includes 4 free announcement templates. Extra designs – arranged under the categories of girl, boy, or twins – may be purchased for $1.99 for a set of 10 designs (6 for twins). The application can be downloaded on the App Store.

Visit the website www.bambinapp.com for more information on this application, including a detailed description and screen shots.

“Des p’tits bonheurs” is a small Swiss company that has been in operation for 10 years in the field of graphic design. Beginning in 2011, the company is expanding its range of activities by creating and marketing its own iPhone applications. More information is available on the website www.desptitsbonheurs.com . 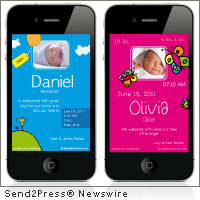 NEWS ARCHIVE NOTE: this archival news content, issued by the news source via Send2Press Newswire, was originally located in the Send2Press® 2004-2015 2.0 news platform and has been permanently converted/moved (and redirected) into our 3.0 platform. Also note the story “reads” counter (bottom of page) does not include any data prior to Oct. 30, 2016. This press release was originally published/issued: Wed, 15 Jun 2011 10:59:02 +0000

LEGAL NOTICE AND TERMS OF USE: The content of the above press release was provided by the “news source” Des p'tits bonheurs or authorized agency, who is solely responsible for its accuracy. Send2Press® is the originating wire service for this story and content is Copr. © Des p'tits bonheurs with newswire version Copr. © 2011 Send2Press (a service of Neotrope). All trademarks acknowledged. Information is believed accurate, as provided by news source or authorized agency, however is not guaranteed, and you assume all risk for use of any information found herein/hereupon.