HOUSTON, Texas, June 16, 2011 (SEND2PRESS NEWSWIRE) — Golfers in the Houston Metro area have a new tool at their disposal to help them track down additional players, thanks to ActiveEmptyNesters.com, a new social networking site aimed at helping Baby Boomers lead an active lifestyle.

ActiveEmptyNesters has added two new “interest groups” to their social networking site that will make it much simpler for members to find extra players with similar handicaps and for lone players to locate foursomes seeking additional players.

“Active Empty Nesters is a great way for men or women to reach out for free to others with similar interests,” explained Ronald Mercier, creator of the ActiveEmptyNesters.com website. “Often golfers need up to 4 players for a given time on a busy course. After you’ve exhausted your friends, you may have someone assigned to your foursome at tee time by the starter. This sometimes pairs good players with a not so good player, and as a single player, it can often be difficult to find others with a similar skill level and the free time to play.”

The two new groups are: “Houston Metro Women’s Impromptu Golf Group” and “Houston Metro Men’s Golf Pick-Up Group.” Members of either can broadcast messages to the group (or to an outside email address) for any golfing event. The event can list the tee time, the number of players they are looking for, preferred handicap, and the location of their game. This allows both groups and individuals to find players of a similar caliber, and because the groups are open to any skill level, it ensures a wide range of handicaps are available.

There are several such groups on the site located in metropolitan areas within the U.S. However, if there’s not a Golf group in a member’s area, we encourage our members to start a group themselves. We’ll provide all the tools they need to set the group up, get it running smoothly and begin promoting it to friends and other members. ActiveEmptyNesters.com will even help members create their group – all a member has to do is email us with their request. There is no charge for members to set up a new group.

The http://ActiveEmptyNesters.com website provides a dynamic social gathering place allowing members to meet others with similar interests and provides the tools to easily interact with other users and friends. Membership to the site is completely free. Once registered, members can begin setting up their personal profile, inviting friends to events, and communicating with old and new friends alike through the site’s built in social-networking features.

About Active Empty Nesters:
Active Empty Nesters, LLC is a Colorado Limited Liability Company formed by Ronald Mercier. Mr. Mercier, owner and creator of ActiveEmptyNesters.com, has made it his mission to help his generation stay involved in, and educated on, the rapidly changing technology of today’s modern world. The Active Empty Nesters social media website is designed specifically for the demographic of 50-and-over, to catch up with friends, and find new ones. 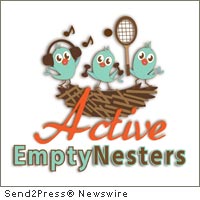 NEWS ARCHIVE NOTE: this archival news content, issued by the news source via Send2Press Newswire, was originally located in the Send2Press® 2004-2015 2.0 news platform and has been permanently converted/moved (and redirected) into our 3.0 platform. Also note the story “reads” counter (bottom of page) does not include any data prior to Oct. 30, 2016. This press release was originally published/issued: Thu, 16 Jun 2011 09:57:01 +0000

LEGAL NOTICE AND TERMS OF USE: The content of the above press release was provided by the “news source” Active Empty Nesters, LLC or authorized agency, who is solely responsible for its accuracy. Send2Press® is the originating wire service for this story and content is Copr. © Active Empty Nesters, LLC with newswire version Copr. © 2011 Send2Press (a service of Neotrope). All trademarks acknowledged. Information is believed accurate, as provided by news source or authorized agency, however is not guaranteed, and you assume all risk for use of any information found herein/hereupon.