CHARLOTTESVILLE, Va., June 22, 2011 (SEND2PRESS NEWSWIRE) — nPulse Technologies has announced the next step in its aggressive 2011 growth plans by adding experienced industry executives Bill Cantrell and Rick Truitt to its senior leadership team. Cantrell will take charge of growing the company’s established business in the Federal Government sector, and also be responsible for key technology and channel alliances. Truitt will lead nPulse’s rapidly growing sales program in financial and commercial markets.

“Bill and Rick are widely respected and uniquely experienced executives in the networking and security sectors, and we are delighted to have leaders of their caliber joining the nPulse team at this key stage in our company’s growth plans,” said Peter Shaw, Co-founder and VP at nPulse.

About nPulse Technologies, LLC:
nPulse Technologies, LLC is a leader in high-speed packet capture and replay. The company’s flagship product, HammerHead Capture & Replay, provides customers with easy to use, high-fidelity network analysis and visibility capabilities at speeds up to 20Gbps. Designed around open industry standards, HammerHead delivers unprecedented performance at an affordable cost and allows for easy deployment with existing IT solutions.

nPulse Technologies is a world-class provider of information technologies, a trusted advisor to its clients, and a respected industry leader in packet capture technology. The company is a privately held, Veteran-owned business with a strong history of service in the Federal government community. It is headquartered in Charlottesville, Virginia, USA. 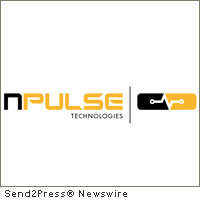 NEWS ARCHIVE NOTE: this archival news content, issued by the news source via Send2Press Newswire, was originally located in the Send2Press® 2004-2015 2.0 news platform and has been permanently converted/moved (and redirected) into our 3.0 platform. Also note the story “reads” counter (bottom of page) does not include any data prior to Oct. 30, 2016. This press release was originally published/issued: Wed, 22 Jun 2011 20:22:08 +0000

LEGAL NOTICE AND TERMS OF USE: The content of the above press release was provided by the “news source” NPulse Technologies or authorized agency, who is solely responsible for its accuracy. Send2Press® is the originating wire service for this story and content is Copr. © NPulse Technologies with newswire version Copr. © 2011 Send2Press (a service of Neotrope). All trademarks acknowledged. Information is believed accurate, as provided by news source or authorized agency, however is not guaranteed, and you assume all risk for use of any information found herein/hereupon.