ASHEVILLE, N.C., June 24, 2011 (SEND2PRESS NEWSWIRE) — As soon as SimplyHome was asked by the Extreme Makeover: Home Edition design team to provide some unique technology applications to support independent living for a home makeover, they loaded some trailers and vehicles and hit the road ready for action.

The home is for the Keefer family of York, PA. In 2008, Brian, a star athlete and college sophomore, had a gymnastics accident that left him paralyzed from the neck down. Brian’s family pulled together and his dad, Steve, retired early from the military to help his son with the activities of daily living.

As the show’s design team realized the specific needs of this family, assistive technology seemed to be a solution that would really enhance Brian’s independence and the family’s peace of mind.

“Extreme Makeover: Home Edition called and asked us to create some of the solutions that would enable Brian to have more control over his environment – inside and outside his home,” explains Ian Sanders, SimplyHome’s Director of Sales.

Allen Ray, SimplyHome’s CEO, reports that since their arrival, “The production crew and staff have been absolutely amazing. And the family – they are very spiritual and I have to admit I had a lump in my throat while we talked about the plans for promoting Brian’s independence through our wireless technologies.”

Ray adds that the house has never had fewer than 75-100 construction people working at any given time with multiple vendors working together in every category. Building inspectors are very much involved and other volunteers are available to assist as needed.

Currently, the family has a two-story Colonial home and Brian is not able to access a good portion of it. This home makeover project will ensure that life becomes easier for Brian and the rest of his family – his dad, Steve, his mom, Dawn, and his brothers; Adam, Scott and Colin.

In 2003, SimplyHome began to brainstorm about the idea of creating assistive technologies to help the elderly and people with disabilities to live more independently.

“We thought if smart home technology can be used to do things like send alarms to fire and police departments or turn lights on and off remotely, why not create outcomes using technology to support individuals’ independence,” says Ray. “This experience is truly an honor, especially when you’re committed to helping people like we are,” states Ray.

This build will launch the show’s ninth season on ABC and will air this fall – the exact date is to be announced. 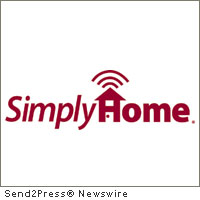 NEWS ARCHIVE NOTE: this archival news content, issued by the news source via Send2Press Newswire, was originally located in the Send2Press® 2004-2015 2.0 news platform and has been permanently converted/moved (and redirected) into our 3.0 platform. Also note the story “reads” counter (bottom of page) does not include any data prior to Oct. 30, 2016. This press release was originally published/issued: Fri, 24 Jun 2011 20:20:29 +0000

ABOUT THE NEWS SOURCE:
SimplyHome

LEGAL NOTICE AND TERMS OF USE: The content of the above press release was provided by the “news source” SimplyHome or authorized agency, who is solely responsible for its accuracy. Send2Press® is the originating wire service for this story and content is Copr. © SimplyHome with newswire version Copr. © 2011 Send2Press (a service of Neotrope). All trademarks acknowledged. Information is believed accurate, as provided by news source or authorized agency, however is not guaranteed, and you assume all risk for use of any information found herein/hereupon.