LOS ANGELES, Calif., July 4, 2011 (SEND2PRESS NEWSWIRE) — While “mantra-rock” may not yet be a recognized music genre, it springs to life with the delightful onslaught of sound from Larisa Stow & Shakti Tribe (www.larisastow.com) on their new album, “Rock on Sat Nam!” (Prema Shakti Music). The vocals are impassioned and the music soothes one minute and urges you into aural ecstasy the next.

At the heart of her songs is a spirituality that is part of the very core of her being. “I believe that music is the bridge that brings us together,” says Stow. “When I integrate sounds from another culture, I feel like I am embracing it, declaring our oneness,” she states. The album title combines English and Sanskrit and may be translated as a call to “Live a Truthful Life.”

The entire album will be available in a “name your own price” offer from July 4 through July 18, 2011. Check the artist website for details. “Even after the special promotion ends, there will always be at least one free track available,” notes manager Leanne Wood. “In addition, you can enjoy Larisa’s music on YouTube,” she adds.

Larisa Stow brings out emotional reactions from listeners. For example, Shannon Nies in VISION Magazine writes that Stow is “passionate about closing the bridge between different people and cultures,” and that Stow’s music “is about awakening the leader and visionary within ourselves.”

About Larisa Stow:
Stow’s mix of spiritually-inspired lyrics, catchy melodies and pop grooves continues to earn her awards, albums, and major gigs. At the turn of the century, as the promise of the “big record deal” hung in the air, Larisa walked away to learn how to create music as a pure expression of love. She worked with Thomas Ashley-Farrand (author of “Healing Mantras”) and then explored kirtan (devotional call-and-response music) and chant music. “What I found,” she states, “was deeper into music and deeper into my soul.” Learn more at: http://www.larisastow.com .

About Non-Profit Shakti Tribe Foundation:
Bringing messages of peace, hope and love in order to empower, transform and educate are the goals of Shakti Tribe Foundation, a 501[c](3) dedicated to teaching the concepts of Oneness: that we are all connected by the invisible threads of our humanity beyond race and religion. Larisa Stow sees this work as pivotal in positively touching people’s lives. 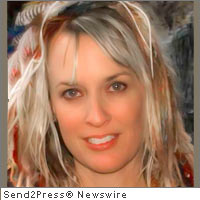 NEWS ARCHIVE NOTE: this archival news content, issued by the news source via Send2Press Newswire, was originally located in the Send2Press® 2004-2015 2.0 news platform and has been permanently converted/moved (and redirected) into our 3.0 platform. Also note the story “reads” counter (bottom of page) does not include any data prior to Oct. 30, 2016. This press release was originally published/issued: Mon, 04 Jul 2011 08:59:22 +0000

ABOUT THE NEWS SOURCE:
Larisa Stow and Shakti Tribe

LEGAL NOTICE AND TERMS OF USE: The content of the above press release was provided by the “news source” Larisa Stow and Shakti Tribe or authorized agency, who is solely responsible for its accuracy. Send2Press® is the originating wire service for this story and content is Copr. © Larisa Stow and Shakti Tribe with newswire version Copr. © 2011 Send2Press (a service of Neotrope). All trademarks acknowledged. Information is believed accurate, as provided by news source or authorized agency, however is not guaranteed, and you assume all risk for use of any information found herein/hereupon.