MESA, Ariz., July 11, 2011 (SEND2PRESS NEWSWIRE) — Long-time Chicago Cubs spring training P.A. announcer, Tim Sheridan, has partnered with Kickstarter.com to help complete a documentary film over 25 years in the making. “Boys of Spring – The Movie,” follows Tim on his journey with the iconic, hard-luck, Chicago Cubs as both he and the Cubs attempt to reach their ultimate dreams.

The film is full of behind the scenes, never-before-seen footage shot by Tim as he worked next to Cubs legends like Harry Caray and Ron Santo. As Tim puts it, “There’s more to a team than the games they play.”

“Boys of Spring – The Movie” is nearing final production; however funding is needed for official release of this unique documentary to fans. Tim says, “Kickstarter seemed to be the best way to get Cubs fans involved in the production of the film. As a die-hard Cubs fan myself, I know how important our team’s legacy and history is. Kickstarter gives fans a rare opportunity to contribute to that history.”

To be a part of “Boys of Spring – The Movie,” fans can donate as little as $10 using an Amazon.com account. As a thank you, fans will receive a copy of the Boys of Spring documentary before its official release next spring. There are a range of donation levels and rewards available on Kickstarter.com, including Cubs memorabilia and your name in the movie’s credits. With a significant donation ($3,000+), Tim will personally announce your child’s little league game, speak at an event, or name you as a producer of the film.

Boys of Spring isn’t about a team winning or losing. It’s about something deeper. An examination of life on its winding path and how, in spite of perceived failures, there is happiness and success. Cub fans will find joy this season and for years to come with the Boys of Spring film by donating and claiming their place in Cubs history. An epic World Series drought can’t stop the faithful Cubs followers, who know better than anyone – “There’s always next spring!”

About Boys Of Spring:
“Boys of Spring – The Movie” is the first documentary film rooted in the history of the Chicago Cubs spring training. For over 25 years, Cubs spring training P.A. announcer, Tim Sheridan, has been documenting his up-close-and-personal experience with the Cubs. The documentary is full of behind the scenes, never-before-seen footage shot by Tim as he worked next to Cubs legends like Harry Caray and Ron Santo. Unlike other sports documentaries, “Boys of Spring – The Movie” delivers a compelling and innovative first person narrative that spans decades. The film is scheduled to release in spring 2012, and will be available on DVD. Read more about Tim Sheridan at www.boysofspring.com .

About Kickstarter:
Featured in CNN, Wired, and The New York Times, Kickstarter.com is the largest funding platform for creative projects in the world. Every month, people pledge millions of dollars to projects from the worlds of music, film, art, technology, design, food, publishing and other creative fields. 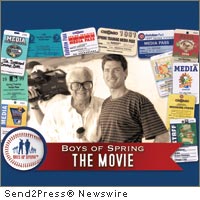 Alternate Headline: Voice of Cubs Tim Sheridan Asks Fans to Be a Part of Cubs’ Documentary ‘Boys of Spring – The Movie’

NEWS ARCHIVE NOTE: this archival news content, issued by the news source via Send2Press Newswire, was originally located in the Send2Press® 2004-2015 2.0 news platform and has been permanently converted/moved (and redirected) into our 3.0 platform. Also note the story “reads” counter (bottom of page) does not include any data prior to Oct. 30, 2016. This press release was originally published/issued: Mon, 11 Jul 2011 17:58:01 +0000

ABOUT THE NEWS SOURCE:
Tim Sheridan

LEGAL NOTICE AND TERMS OF USE: The content of the above press release was provided by the “news source” Tim Sheridan or authorized agency, who is solely responsible for its accuracy. Send2Press® is the originating wire service for this story and content is Copr. © Tim Sheridan with newswire version Copr. © 2011 Send2Press (a service of Neotrope). All trademarks acknowledged. Information is believed accurate, as provided by news source or authorized agency, however is not guaranteed, and you assume all risk for use of any information found herein/hereupon.