NEW YORK, N.Y., July 13, 2011 (SEND2PRESS NEWSWIRE) — To celebrate the launch of its new website, Fare Buzz – a leading travel company based out of New York City – is giving away several pre-paid rewards cards through their social communities.

The giveaway can be entered into in three different ways –

2. $50 Rewards Card – To enter to win one of the five $50 rewards cards, users need to get social and tweet their entry through their Twitter account by using hashtag #FareBuzz and linking to the Fare Buzz Facebook page.

Fare Buzz re-launched its new website, http://farebuzz.com, on July 4, 2011 to include a new look and functionality, as well as its rewards program. The rewards program is based on a point to dollar system. When a user books their flight, hotel, car rental or vacation package through Fare Buzz, they receive points that will turn into cash on a Fare Buzz/American Express cash card.

These rewards cards can be used on anything from Shopping, Travel, Entertainment, Dining and more with over 200 participating retailers and travel providers. The card is re-loadable, so as users continue to book with Fare Buzz and accrue points, the rewards card points will continue to grow. Users will receive a Buzz Rewards ID to use when making reservations online or over the phone.

Fare Buzz, Inc. is one of the leading travel companies, based out of New York City. It has been in business since 1994 and specialized in selling Cheap Tickets. Over the years it has added Hotels, Car Rentals and Vacation Packages to its product line making it a One Stop Travel Shop for all its clients. Reservations can be booked on its website or thru its call center, open 7 days a week. Fare Buzz is a member of all major travel associations and has an A+ rating from the Better Business Bureau.

To take advantage of this offer register now on the Buzz Rewards page at FareBuzz.com . 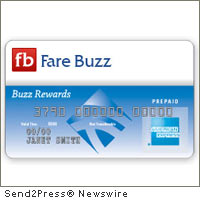 NEWS ARCHIVE NOTE: this archival news content, issued by the news source via Send2Press Newswire, was originally located in the Send2Press® 2004-2015 2.0 news platform and has been permanently converted/moved (and redirected) into our 3.0 platform. Also note the story “reads” counter (bottom of page) does not include any data prior to Oct. 30, 2016. This press release was originally published/issued: Wed, 13 Jul 2011 16:49:05 +0000

ABOUT THE NEWS SOURCE:
Fare Buzz

LEGAL NOTICE AND TERMS OF USE: The content of the above press release was provided by the “news source” Fare Buzz or authorized agency, who is solely responsible for its accuracy. Send2Press® is the originating wire service for this story and content is Copr. © Fare Buzz with newswire version Copr. © 2011 Send2Press (a service of Neotrope). All trademarks acknowledged. Information is believed accurate, as provided by news source or authorized agency, however is not guaranteed, and you assume all risk for use of any information found herein/hereupon.