GIV-N-GET LLC Announces Development of Egiva.com 2.0 (an alternative site to ‘FREE’ items on Craigslist) and its Project on Kickstarter.com

PLACERVILLE, Calif., July 25, 2011 (SEND2PRESS NEWSWIRE) — Jamison and Virginia Miller, of GIV-N-GET LLC, developers of Egiva.com (an alternative web site to “FREE” items on Craigslist), announces its project on Kickstarter.com (the largest funding platform for creative projects in the world).

Many people have things to give to others and want their things to go to someone who can use them. Egiva.com is an easy, user friendly system to match free items with those who need them in order to promote collaborative sharing.

Working to Make a Dream Come True – The story of Egiva:

Virginia Weiseth-Miller teaches elementary school in northern California. She’s experienced her share of trials over the years, including the loss of nearly everything she owned. As she rebuilt her life, she became aware of others in similar circumstances and wanted to do something to help. With the assistance of her son, Jamison Miller, she has come up with a website to help people with something to give connect with those who need it. That website is Egiva.com .

The idea behind the free site is simple: recycle what you don’t want any more to someone who needs it rather than putting it in a landfill. With that goal in mind, Virginia and Jamison built a site to let people search by location, by category or by group. Only free items can be offered on the site. It is “collaborative giving,” not selling. Every item shared on Egiva is an item getting a second chance at usefulness.

A new user registers on Egiva with basic information: user name, email and location. The user can then post offerings or search for needed items by category. All information entered on Egiva is confidential

To date, Weiseth-Miller has supported development of the entire enterprise, but she’s reached the end of her financial resources. In order to take Egiva to the next level, she and her son have applied to Kickstarter.com, the Internet-based funding company. Weiseth-Miller is working against a deadline: she only has until August 26 to collect $10,000 in pledges through Kickstarter or else Egiva gets nothing.

So she’s getting out the word: emails, phone calls and social networking sites are among the tools she’s employing to work toward the goal. Her dream rests in the balance.

Donations through Kickstarter are only funded if the total goal is pledged. Amounts pledged start at $1.00; higher amounts earn benefits within the Egiva program, such as free smart phone applications or help establishing a giving group for family, friends, or organizations.

Please visit the Kickstarter site and learn more about Egiva. Your support can help not only a dream come true but help many people during tough economic times in our own communities find things they need. 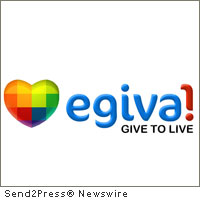 NEWS ARCHIVE NOTE: this archival news content, issued by the news source via Send2Press Newswire, was originally located in the Send2Press® 2004-2015 2.0 news platform and has been permanently converted/moved (and redirected) into our 3.0 platform. Also note the story “reads” counter (bottom of page) does not include any data prior to Oct. 30, 2016. This press release was originally published/issued: Mon, 25 Jul 2011 23:21:01 +0000

ABOUT THE NEWS SOURCE:
GIV-N-GET LLC

LEGAL NOTICE AND TERMS OF USE: The content of the above press release was provided by the “news source” GIV-N-GET LLC or authorized agency, who is solely responsible for its accuracy. Send2Press® is the originating wire service for this story and content is Copr. © GIV-N-GET LLC with newswire version Copr. © 2011 Send2Press (a service of Neotrope). All trademarks acknowledged. Information is believed accurate, as provided by news source or authorized agency, however is not guaranteed, and you assume all risk for use of any information found herein/hereupon.