Wandering Study Documentary Presents a Different Side of Africa

“We want to show through our film the positive efforts of local thriving businesses and families. We aim to share constructive, personal stories that otherwise might not be told,” said Wandering Study Co-founder, Briana De Marco.

“The tremendous attention brought to the African continent by celebrities such as Bono and Angelina Jolie is important work. We want to help create a more complete picture.”

The documentary project will focus on the countries of Tanzania and Ethiopia. “By documenting these positive stories we can bring a fresh and productive dialogue in solving the problems that do exist throughout Africa,” said Co-founder David Perkins.

The results of Wandering Study’s progress can be seen at their website, www.wanderingstudy.com . 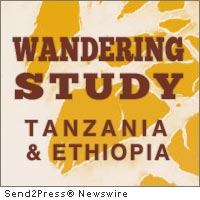 Alternate Headline: Documentary Project from Wandering Study Presents a Different Side of Africa

NEWS ARCHIVE NOTE: this archival news content, issued by the news source via Send2Press Newswire, was originally located in the Send2Press® 2004-2015 2.0 news platform and has been permanently converted/moved (and redirected) into our 3.0 platform. Also note the story “reads” counter (bottom of page) does not include any data prior to Oct. 30, 2016. This press release was originally published/issued: Mon, 01 Aug 2011 10:59:03 +0000

ABOUT THE NEWS SOURCE:
Wandering Study

LEGAL NOTICE AND TERMS OF USE: The content of the above press release was provided by the “news source” Wandering Study or authorized agency, who is solely responsible for its accuracy. Send2Press® is the originating wire service for this story and content is Copr. © Wandering Study with newswire version Copr. © 2011 Send2Press (a service of Neotrope). All trademarks acknowledged. Information is believed accurate, as provided by news source or authorized agency, however is not guaranteed, and you assume all risk for use of any information found herein/hereupon.