Zavee Profiled in The Sun-Sentinel

BOCA RATON, Fla., Aug. 1, 2011 (SEND2PRESS NEWSWIRE) — Zavee, the cash back rewards loyalty program, is featured in the Monday, August 1st edition of the Sun-Sentinel’s Manager Minute column by Cindy Kent. The business article in the Money section of the paper features Jerry Horowitz, vice president of merchant sales for Zavee. In the article, he discusses how Zavee ( www.zavee.com ) engages businesses and customers via social media, and how Zavee’s marketing platform builds long-term relationships between merchants and consumers.

In the article, Kent details Horowitz’s job duties which include “developing Zavee’s customer base of merchants including restaurants, salons, service providers and retailers that will in turn, attract discount-seeking consumers.”

Consumers do not pay any fees to join Zavee and never have to purchase discount coupons in advance, they simply register a credit or debit card and when they make purchases at Zavee merchants they earn a cash back reward, each and every time they shop or dine.

Through Zavee’s unique marketing platform, merchants are able to create offers that attract new consumers and also reward loyal ones. This becomes the basis for the long-term relationship building that distinguishes Zavee from other programs such as Groupon and Social Living.

“Many small businesses are not using social media as an everyday part of doing business,” stated Horowitz in the article.

Zavee makes that interaction easy, and Horowitz works with the Zavee merchants educating them about the benefits of the Zavee platform.

The article also provided tips from Horowitz on building relationships and trust in the business world and in the office.

“It was an outstanding article,” said Horowitz, “I have been receiving amazing feedback from people who said how the column detailed the core benefits Zavee is bringing to both merchants and consumers.”

About Zavee:
Zavee has recently launched in the South Florida market with plans for national expansion. Zavee is free for consumers to join, and the website – www.zavee.com – makes it easy to find local merchants and their cash back offers. Registered shoppers earn cash back rewards each and every time they shop and dine at Zavee merchants, and never need to bring coupons or loyalty cards. The latest Zavee news is also available at www.Facebook.com/Zavee or on Twitter @Zavee. 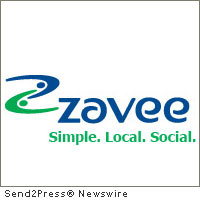 NEWS ARCHIVE NOTE: this archival news content, issued by the news source via Send2Press Newswire, was originally located in the Send2Press® 2004-2015 2.0 news platform and has been permanently converted/moved (and redirected) into our 3.0 platform. Also note the story “reads” counter (bottom of page) does not include any data prior to Oct. 30, 2016. This press release was originally published/issued: Mon, 01 Aug 2011 20:57:07 +0000

ABOUT THE NEWS SOURCE:
Zavee LLC

LEGAL NOTICE AND TERMS OF USE: The content of the above press release was provided by the “news source” Zavee LLC or authorized agency, who is solely responsible for its accuracy. Send2Press® is the originating wire service for this story and content is Copr. © Zavee LLC with newswire version Copr. © 2011 Send2Press (a service of Neotrope). All trademarks acknowledged. Information is believed accurate, as provided by news source or authorized agency, however is not guaranteed, and you assume all risk for use of any information found herein/hereupon.